OK, what is a picture of a pig (even a cute one!) doing in an Energy Report? It turns out that the nation’s largest pork producer raises more than 30 million hogs per year. They make a lot of... gas (you knew that). In fact, the methane produced by these animals is 25 times more potent as a greenhouse gas than the equivalent amount of carbon dioxide. Two companies are attempting to remove 8 billion cubic feet per year of livestock gas from the atmosphere - thus preventing the emissions equivalent of 3.5 million tons/ year of carbon dioxide. That’s like taking 750,000 cars permanently off the road, or planting 60 million new trees every year... For more, see "This Week's Key Take-Away"  below. 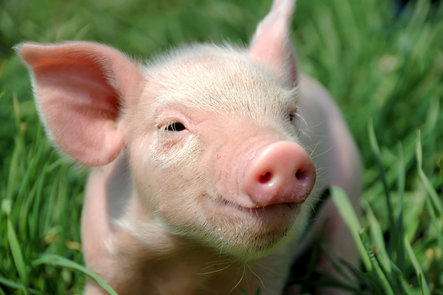 The weekly EIA Natural Gas Storage Report advised today that there was an injection of 75Bcf into Underground Storage for the week ending 10/2/20.

This is 2Bcf above the forecast of a 73Bcf injection, the average prediction of sector analysts and traders in the Dow Jones Newswires weekly survey. This compares with an injection of 102Bcf last year and a 86Bcf build for the five-year average. Storage is 444Bcf above last year for the same week and  394Bcf above the 5-year average. Working gas in storage stands at 3,831Bcf.
The National Hurricane Center projections early Thursday has Hurricane Delta on a collision course with Louisiana, putting much of the state’s coast, along with part of the upper Texas coast, under a hurricane warning. The threat from Delta comes just as the Cameron liquefied natural gas (LNG) terminal was showing signs of returning to normal activity following extended disruptions from Laura. About 80%, or 1.49 million barrels per day (bpd), of offshore crude oil production and about 49% of natural gas output have been shut in the U.S. Gulf, the U.S. Bureau of Safety and Environmental Enforcement reported. (Read More ...) 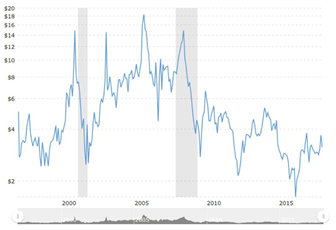 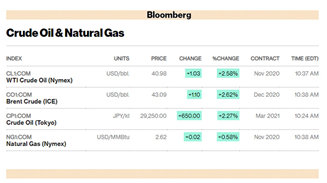 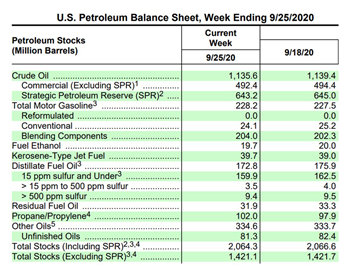 US crude inventories (EIA)  increased by 0.5 million barrels to 492.9 million for the week ended October 2nd, according to data released yesterday morning by the US Department of Energy. Traders in the Reuters poll expected an increase of 0.3 million barrels. 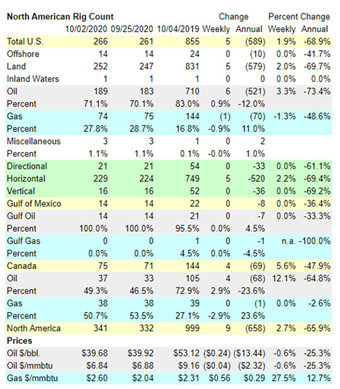 According to the Baker Hughes Count, US Rotary Rigs targeting Natural Gas were -1 at 74 for the week ending October 2nd and -70 from last year. 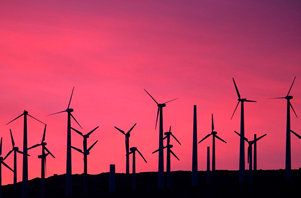 That never happened, as the New York Times and the public radio program The Allegheny Front each pointed out recently through in-depth looks at coal country since Trump’s 2016 election.
Now as the Nov. 3 presidential election draws nearer, Wall Street has been examining what a potential shift in power in Washington might mean for the U.S. energy sector.

Despite the Trump administration’s oil-and-gas friendly policies, including its push to open up public lands for exploration and slashing of environmental protections, the shift away from fossil fuels is already well underway.

BlackRock BLK, 0.55%, the world’s largest asset manager, on Monday underscored how a potential White House win by former Vice President Joe Biden and Democrats taking control of the Senate could accelerate the move by the U.S. toward cleaner power sources.

Specifically, they noted Biden’s near $2 trillion Green New Deal proposal aims to significantly slash emissions in the transport sector and to retrofit commercial and municipal buildings to increase their energy efficiency by 2050.

Even without a united “blue” government in power, Pyle’s team still sees plenty that could happen under a Biden win on the regulatory front, including crack downs on drilling and pipeline permits that could hamper U.S. shale supply and increase oil prices, particularly once demand returns as the U.S. overcomes the COVID-19 pandemic.

“Yet any spike in oil prices may not be sustained given the prospect of an accelerating shift to clean energy in the transport sector,” the BlackRock team wrote. 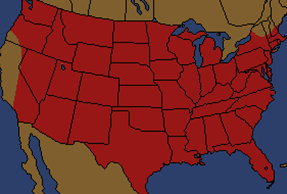 The AccuWeather 1-5 Day Outlook forecasts above-normal temps for the entire US, with the exception of Northern New England and California, which will be at normal temps.

The 30-Day Outlook forecasts above-normal temps for the entire country with the exception of the West Coast states and Southeastern coastal states.

The 90-Day Outlook predicts normal temps for the entire US, with the exception of Minnesota, Northern New England and the Gulf Coast states, which are projected to be at above-normal temps.

Severe Weather:  Delta is expected to grow in size as it approaches the northern Gulf Coast, where life-threatening storm surge and dangerous hurricane-force winds are likely beginning Friday, particularly for portions of the Louisiana coast. Storm Surge and  Hurricane  Warnings are in effect and residents in these areas should follow advice given by local officials and rush preparedness actions to completion. Significant flash, urban, small stream and minor to isolated moderate river flooding is likely Friday and Saturday from portions of the central Gulf Coast into portions of the Lower Mississippi Valley. As Delta moves farther inland, heavy rainfall is expected in the Ohio Valley and Mid-Atlantic this weekend. 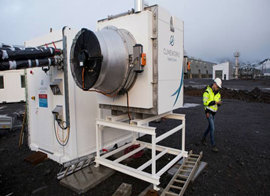 As political clamour and determination to cut carbon emissions grows, so too has excitement around the prospects of game-changing technologies that can accelerate the process.

From clean hydrogen to carbon capture and storage there is a rising cacophony around the potential of “silver bullet” solutions to climate change.

But there is a hitch: both of these technologies remain too expensive and neither has yet been successfully deployed at scale. Experts say a focus on futuristic solutions distracts from the ability of the energy sector to significantly decarbonise power production by using readily available technology and ramping up the deployment of renewables.

The first priority should be the mass scale-up of renewable power “I don't think we need to wait — and I don't think we can wait — for a silver bullet,” says Faustine Delasalle, director of the Energy Transitions Commission, a research body backed by the World Economic Forum. “To some extent, the silver bullet that we needed, we already have — and it’s renewables.”

The costs of wind and solar power generation have fallen by 90% and 60%, respectively, over the past decade, according to the ETC. That makes them competitive in price with fossil fuels.

In order to reach net-zero emissions by 2050, the first priority should be the mass scale-up of renewable power, according to the ETC, by cranking up the rate of installations globally by a factor of five to six compared with 2019 levels, and retrofitting homes and businesses to stop energy being wasted.

“This is really the low hanging fruit that doesn't require any major technology breakthrough,” says Ms Delasalle. “It's less sexy but it's available and it's cost-competitive.”

Solid returns also make renewable infrastructure a more attractive bet for most investors than the likes of hydrogen and CCS and other promising technologies even further behind in the queue like small scale nuclear, tidal power and direct air capture of carbon dioxide. $311bn was pumped into renewable power in 2019, according to the International Energy Agency, approaching the $480bn spent on upstream oil and gas.

“The vast majority of the actual dollars are going to the things that may be less topical to talk about these days, which continues to be the construction of generation and transmission infrastructure — wind, solar, biomass, et cetera,” says Alfredo Marti, a partner at Riverstone Holdings who oversees a private equity portfolio of over $4bn in the renewables sector.

“It also makes sense because that is where the vast majority of the volume of dollars is required.” (Read More ...) 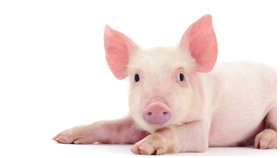 “Pigs are extremely efficient,” says Kraig Westerbeek, who oversees renewable energy production for Smithfield Foods, the world’s biggest pork producer. For what farmers put into them, they get a lot out. “They eat 2.4 pounds of feed per pound of gain,” he says. “And they produce more gas per pound of live weight.”

Westerbeek is talking about greenhouse gases emitted by the millions of pigs his industrial farms produce each year. Inside his giant barns, manure and urine ooze through holes in a concrete floor before getting piped to open-air ponds called lagoons—some the size of four football fields. In these lakes of livestock waste naturally occurring bacteria—called methanogens—continue to feed and fart out (for lack of a better word)  more gas.

All this methane ends up in the atmosphere, and that is bad news for the planet. Pound for pound, methane packs 25 times the greenhouse effect as the standard environmental villain, carbon dioxide. To make matters worse, it’s long been standard practice for farmers to spray the odoriferous lagoon waste on croplands as rich fertilizer—subjecting Smithfield and its former hog-producing subsidiary, Murphy-Brown, to environmental litigation and scathing publicity as local communities cope with the stench and health risks.

But today, Westerbeek has a better story to tell. In recent years Smithfield has been working to perfect methods of capping lagoons with heavy plastic covers that trap the methane (and much of the reek). The gas inflates the plastic domes in amounts sufficient for people to walk on—like an extremely gross air mattress.

Smithfield has partnered with Richmond, Virginia-based utility giant Dominion Energy to market the gas. Under the plan, Dominion will siphon the pig gas out of these anaerobic digesters, inject it into interstate pipelines and sell it to green-minded customers looking to cut their carbon footprints.

The end result is arguably the cleanest electricity in the nation, says Dominion Chief Operating Officer Diane Leopold. “It’s a win-win-win.” With renewable energy projects, she says, “it’s about how many boxes you can check. This one has an extra box.”

Over the next decade, Dominion aims to invest $650 million into agriculture-derived gas projects. Smithfield will contribute another $250 million. The expected result: 8 billion cubic feet per year of livestock gas—thus preventing the emissions equivalent of 3.5 million tons per year of carbon dioxide. That’s like taking 750,000 cars permanently off the road, or planting 60 million new trees every year. It may sound gimmicky, but replacing just 12% of fossil fuel gas with methane captured from pigs, dairy cows or landfills “can make everything net zero” on an emissions basis, says Leopold.