The drawing below shows several sustainable sources of renewable energy. The DOE has announced new funding for lowering demand in older commercial buildings, as the US moves towards a greener energy future. For more, see "Sustainable and Renewable Energy", "Geopolitical", and "This Week's Key Take-Away" below. 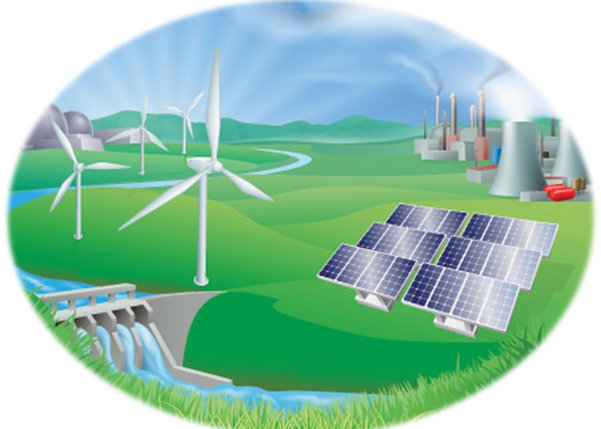 The weekly EIA Natural Gas Storage Report advised today that there was an injection of 76Bcf into Underground Storage for the week ending 9/25/20.

This is 3Bcf below the forecast of a B79Bcf injection, the average prediction of sector analysts and traders in the Dow Jones Newswires weekly survey. This compares with an injection of 109Bcf last year and a 78Bcf build for the five-year average. Storage is 471Bcf above last year for the same week and  405Bcf above the 5-year average. Working gas in storage stands at  3,756Bcf.  The October Natural Gas Contract closed at $2.10. (Read More ...) 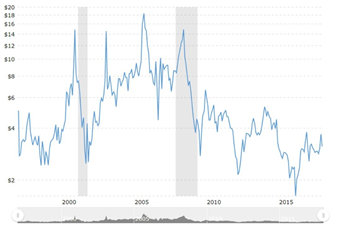 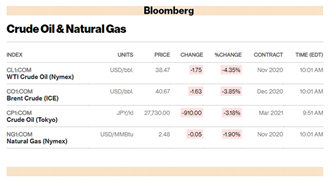 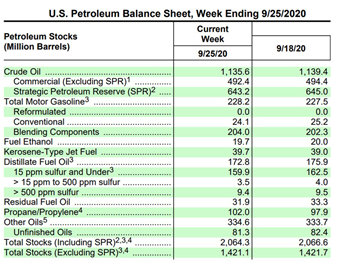 US crude inventories (EIA)  decreased by 2.0 million barrels to 492.4 million for the week ended September 25th, according to data released yesterday morning by the US Department of Energy. Traders in the Reuters poll expected an increase of 1.6 million barrels. 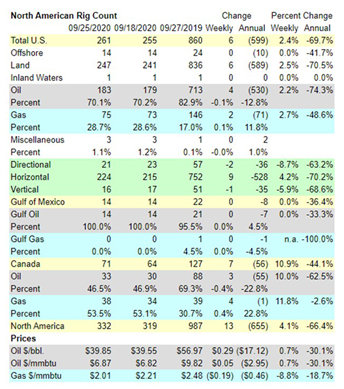 According to the Baker Hughes Count, US Rotary Rigs targeting Natural Gas were +2 at 75 for the week ending September 25th and -71 from last year.

Rigs targeting Crude were +41 to 183. There are 530 fewer rigs targeting oil than last year. Canadian Rigs were +7 to 71 and -56 from last year. US Rigs drilling for oil remain at 70% of all drilling activity. 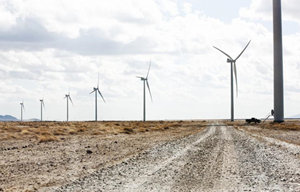 New EIA reports confirm continued expansion of renewables' share of US energy and power: September 28 (Renewables Now) - Notwithstanding the coronavirus pandemic, renewable energy sources (i.e., biofuels, biomass, geothermal, hydropower, solar, wind) continue to expand their share of the nation's energy production and consumption as well as electricity generation, according to a SUN DAY Campaign analysis of data in two reports just released by the US Energy Information Administration (EIA).

The latest issue of EIA's "Electric Power Monthly" (with data through July 31, 2020) reveals that solar and wind both showed continued, strong growth, expanding faster than all other energy sources.

For the period January - July, solar-generated electricity – including distributed solar - expanded by 22.2% (compared to the same period in 2019) and provided nearly 3.4% of the nation’s total. Wind grew by 13.0% and accounted for almost 8.5% of total generation. Combined, net electrical generation by wind and solar is 15.5% greater than a year ago.  Together with hydropower, biomass, and geothermal, renewables provided 21.2% of total electrical output - up from 19.2% a year earlier.

Moreover, renewables produced almost a fifth (i.e., 19.6%) more electricity than coal through July 2020. In fact, electrical generation by coal was 27.5% lower than a year earlier and accounted for just 17.8% of the nation’s total. In addition, renewable energy sources produced 6.7% more electricity than did nuclear power whose output fell 1.7% during the same seven-month period.
Meanwhile, the latest issue of EIA's "Monthly Energy Review" (with data through June 30, 2020) shows domestic energy production by renewable sources (including biofuels) reached an all-time, mid-year high of 6.002 quadrillion Btus (quads) - 0.5% higher than the level achieved a year earlier (Read More ...) 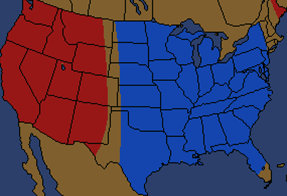 The AccuWeather 1-5 Day Outlook forecasts above-normal temps for the Western third of the US, with the Eastern half at below-normal temps. A thin slice in the Center of the country, running from Canada to Mexico will be at normal temps.

The 30-Day Outlook forecasts above-normal temps for East Coast states and much of the Western half of the US. The balance of the country is expected to be at normal temps.

The 90-Day Outlook predicts normal temps for the entire US, with the exception of Minnesota and Northern New England, which are projected to be at above-normal temps.

Below-normal precipitation if forecast for the entire US over the 6-10 Day period, with the exception of Florida, which is forecast to be at above-normal levels. The National Hurricane Center shows no tropical depressions that could become hurricanes in the Atlantic or Gulf of Mexico. According to a recent report from NOAA’s Climate Prediction Center, there is a 50-55% chance of La Niña conditions arriving this fall and lasting throughout the winter. (Read More ...) 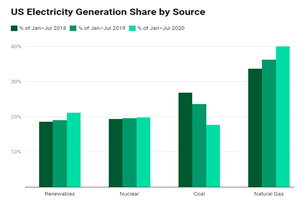 While on this topic of sustainable energy, Elon Musk noted that eventually everything we do will be done with sustainable energy. In Tesla’s case, it is contributing to this with electric vehicles (EVs), solar power for homes and businesses, energy storage for homes and businesses, potentially greener mining, and probably home HVAC systems eventually.

The fact that we are moving forward with clean, renewable energy in the face of the Trump administration, which has sought to destroy all the hard work the previous administrations (not just Obama’s, but several others as well) have done in regards to our environment is almost miraculous, but it shows how competitive wind and solar power have become. Before getting to renewable energy’s growth, let me briefly back up that previous statement. There are many instances which show how our current president is harming our planet, such as:
The full list is much longer. In light of the dark shadow this administration has cast upon our planet, there is at least the hope that renewables are on the rise.

Furthermore, just last week, there was a report showing that 47 US states could meet all of their electricity needs using in-state renewables. The report, by Maria McCoy and John Farrell, shows that if all of the states were to take “full advantage” of their renewable resources, in-state renewable generation would even be more than (Read More ...) 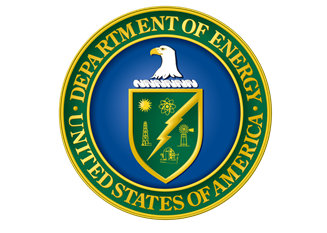 As per a report of the U.S. Energy Information Administration AEO 2018, the use of energy – is highest in the residential sector followed by the commercial sector. Thus, buildings consume up to 80% of peak electricity, which is often termed as the dirtiest and most expensive electricity use by any industry. In the given context, the goal of the Building Technologies Office’s (BTO) is to reduce the energy intensity of U.S. Buildings by 30% by 2030, relative to 2010.

To improve America’s energy efficiency in residential and commercial buildings, the U.S. Department of Energy (DOE), announced on 25th September the Buildings Energy Efficiency Frontiers and Innovation Technologies (BENEFIT) 2020 Funding Opportunity Announcement (FOA). The funding opportunity is for up to $80 million for projects that will improve the energy productivity of the buildings without disrupting or sacrificing the comfort of the occupant, enhance energy demand flexibility across buildings and also include research and development of next-generation building technologies such as building construction tools, remodeling, retrofit practices and associated workforces.