The picture above highlights the polar dialectical battle going on for dominance in energy production. While the EIA points to the generation from fossil fuels, others point to the rise in "clean" energy production. For more, see "Geopolitical" and "Sustainable and Renewable Energy" below. 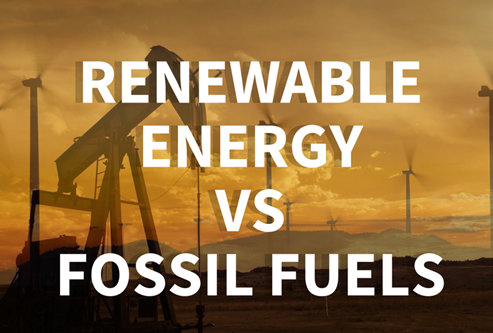 The weekly EIA Natural Gas Storage Report advised today that there was an injection of 89Bcf into Underground Storage for the week ending 9/11/20.

This is 10Bcf above the forecast of an 79Bcf injection, the average prediction of sector analysts and traders in the Dow Jones Newswires weekly survey. This compares with an injection of 82Bcf last year and a 77Bcf build for the five-year average. Storage is 535Bcf above last year for the same week and  421Bcf above the 5-year average. Working gas in storage stands at  3,614Bcf.
(Read More ...) 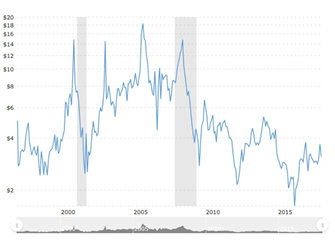 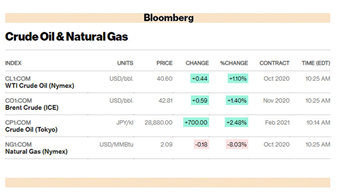 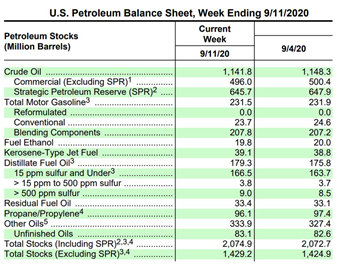 US crude inventories (EIA) decreased by 4.4 million barrels to 496.0 million for the week ended September 11th, according to data released yesterday morning by the US Dept of Energy. Traders in the Reuters poll expected an increase of 1.3 million barrels. 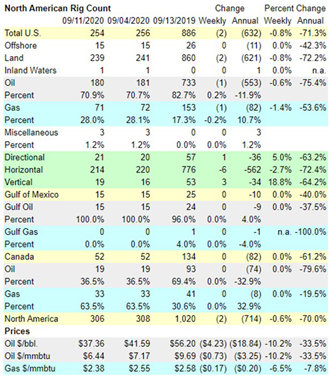 According to the Baker Hughes Count, US Rotary Rigs targeting Natural Gas were -1 at 71 for the week ending September 11th and -82 from last year.

Rigs targeting Crude were +1 at 180. There are 553 fewer rigs targeting oil than last year. Canadian Rigs were unchanged at 56 and -82 from last year. US Rigs drilling for oil drop 1% to 71% of all drilling activity. 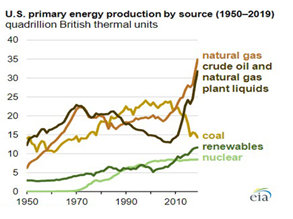 The U.S. Energy Information Administration (EIA) publishes the U.S. total energy flow diagram to visualize U.S. energy from primary energy supply (production and imports) to disposition (consumption, exports, and net stock additions). In this diagram, losses that take place when primary energy sources are converted into electricity are allocated proportionally to the end-use sectors. The result is a visualization that associates the primary energy consumed to generate electricity with the end-use sectors of the retail electricity sales customers, even though the amount of electric energy end users directly consumed was significantly less.

Since 2008, U.S. production of crude oil, dry natural gas, and natural gas plant liquids (NGPL) has increased by 15 quadrillion British thermal units (quads), 14 quads, and 4 quads, respectively. These increases have more than offset decreasing coal production, which has fallen 10 quads since its peak in 2008. 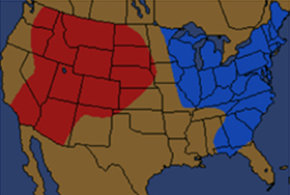 The 11-15 Day Outlook forecasts above-normal temps for the for the entire US, with the exception of the Far-Southeast and the Southwest quarter, which are expected to be at normal temps.

The 30-Day Outlook forecasts above-normal temps for the Eastern and Western thirds of the US, with the center of the country expected to be at normal temps.

The 90-Day Outlook predicts normal temps for the entire US, with the exception of New England, which is projected to be at above-normal temps.

Severe Weather: The National Hurricane Center shows two storms in the Mid-Atlantic and one storm in the Southern Gulf of Mexico. None of the three are expected to become hurricanes.

However, the remnants of Hurricane Sally continues to cause flooding in the Carolinas and Georgia. Coastal Alabama and the Florida Panhandle face a daunting recovery Thursday, as ponds of floodwater and chunks of debris surround homes and businesses a day after a deadly Hurricane Sally walloped the coast with winds and feet of rain.

"We had 30 inches of rain in Pensacola, which is four months of rain in four hours," Pensacola Fire Chief Ginny Cranor said (Read More ...) 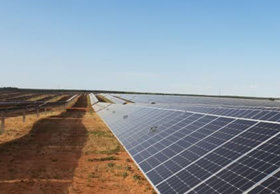 Renewable Energy Continues To Eat Away At Fossil Fuel Dominance: Renewables are set to be the fastest-growing source of energy in the coming decades, giving fossil fuels such as coal and oil a run for their money in many parts of the world.  Sure, the world will continue to need oil, coal, and natural gas in the future, because energy systems cannot and will not switch to 100-percent low-carbon energy sources any time soon.

Recent data and analyses suggest, however, that renewable energy sources such as solar and wind power and increased penetration of electric vehicles (EVs) are becoming increasingly competitive with the dominant energy sources of the 20th century—oil, coal, and natural gas.

Increased rates of electrification and industrialization in emerging markets will support the rise in consumption of energy of all kinds, but all analyses point to slowing growth in oil and gas consumption. On the other hand, renewables have been the fastest-growing energy source in recent years and are expected to continue to be such in the coming decades.

Last year, renewables accounted for 41 percent of the rise in energy demand, the largest of any energy source, BP Statistical Review of World Energy 2020 showed.

According to BP, primary energy growth in 2019 was driven by renewables, followed by natural gas, which together contributed to over three-quarters of the net increase (Read More ...) 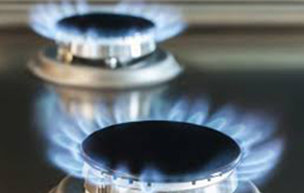 U.S. natural gas futures dropped almost 10% to a six-week low on Thursday after last week’s storage build was bigger than expected, keeping stockpiles on track to reach a record high. Prices were already trading down on expectations output would start to rise from a two-year low as producers return wells shut-in for Hurricane Sally and on forecasts calling for lower cooling demand over the next two weeks.

Front-month gas futures fell over 10%, to $2.01 per million British thermal units (BTU) at 10:42 a.m. EDT. On Wednesday, the contract closed at its lowest since Aug. 13. Data provider Refinitiv said output in the Lower 48 U.S. states was on track to rise to 85.3 billion cubic feet per day (bcfd) on Thursday from a two-year low of 84.8 bcfd on Wednesday due to Sally-related shutdowns.
With cooler weather coming, Refinitiv projected demand, including exports, would fall from 85.3 bcfd this week to 81.9 bcfd next week. The amount of gas flowing to U.S. LNG export plants, meanwhile, averaged 5.4 bcfd so far in September. That was the most in a month since May and was up for a second month in a row for the first time since hitting a record 8.7 bcfd in February as global gas prices rise, making U.S. gas more attractive.

Last week, Natural Gas futures were trading as high as $2.50 but the combination of rigs returning to service in the Gulf of Mexico and demand destruction on land because of Hurricane Sally has caused the drop. While Hurricane Laura last week caused rigs in the Gulf to shut-in, Sally missed the center of the Gulf, staying closer to the Florida West Coast. It is expected that with cooler temps forecasted in the Northeast and demand destruction in the Southwest that prices will remain low.