The picture below shows damage in Louisiana from Hurricane Laura. It may be months before power is restored to all of the flooded areas. over 300,000 customers remain without power in Louisiana, with the southwestern portion of the state the most severely impacted. Some 54,000 are still impacted in East Texas. Additionally, rigs in the Gulf are still shut-in as a result of the storm. For more, see "This Week's Takeaway" below. 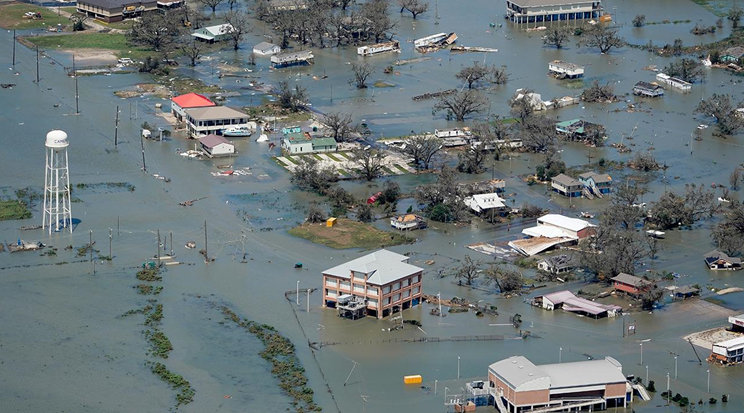 The weekly EIA Natural Gas Storage Report advised today that there was an injection of 35Bcf into Underground Storage for the week ending 8/28/20.

This is 7Bcf above the forecast of a 28Bcf injection, the average prediction of sector analysts and traders in the Dow Jones Newswires weekly survey. This compares with an injection of 77Bcf last year and a 66Bcf build for the five-year average. Storage is 538Bcf above last year for the same week and  407Bcf above the 5-year average. Working gas in storage stands at  3,455Bcf.
(Read More ...) 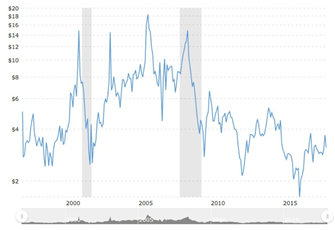 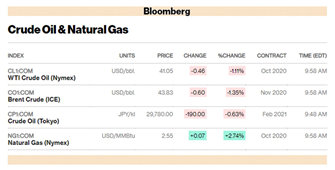 Domestic weekly crude production fell by 1.1M bbl/day, a record in data going back to 1983, but Hurricane Laura caused an average of 1.3M bbl/day to be shut-in by producers operating offshore in the Gulf of Mexico. 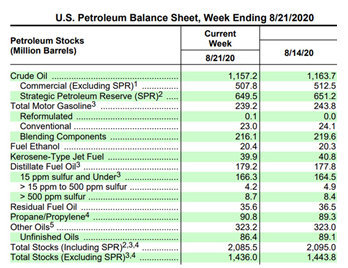 US crude inventories (EIA)  decreased by 9.36 million barrels to 498.4 million for the week ended August 28th, according to data released yesterday morning by the US Dept of Energy. Traders in the Reuters poll expected a decrease of 1.89 million barrels. Hurricane Laura was the cause of the huge drop in production due to shut-ins of wells in the Gulf. 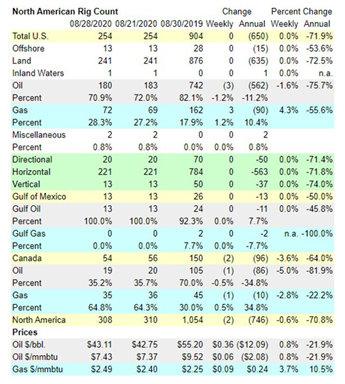 According to the Baker Hughes Count, US Rotary Rigs targeting Natural Gas were +3 at 72 for the week ending August 28th and -90 from last year. 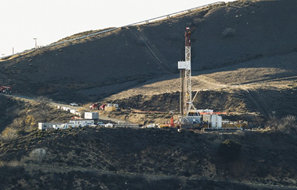 Did the Public Utility Commission Tell SoCalGas to Dispose of Evidence? Nearly five years after the Aliso Canyon Blowout, 1.2 million people still don’t know how they were poisoned.

The California Public Utilities Commission (CPUC) — a body created to regulate utilities and protect consumers — directed a private utility to dispose of materials crucial to an ongoing health study, according to community members and activists.

According to a letter sent to County Supervisor Kathryn Barger from The Aliso Canyon Disaster Health Research Study (ACDHRS) Community Advisory Group(CAG), the CPUC sent disposal instructions to Southern California Gas (SoCalGas) telling them to dispose of excavated soil from the site of the massive Aliso Canyon Gas Blowout.

The Los Angeles County Department of Public Health is in the beginning stages of a court-ordered 25 million dollar health study looking into the health effects of the 111 day, record-breaking leak.

“The CAG is appalled the county didn’t file an injunction upon learning about the PUC instruction to destroy this evidence,” Andrew Krowne, CAG Member said. “That material may provide the scientists doing the health study critical information. There is no logical reason that you would not test the material.”

According to the CAG letter sent to Barger, “Any manipulation of these samples should be viewed as tampering of scientific evidence.”

Community members found out about the CPUC request in early August and estimate that it could have been made as early as June. “We are very unclear of who knew what when and are not getting clear answers from DPH,” said Craig Galanti, a member of CAG. (Read More ...) 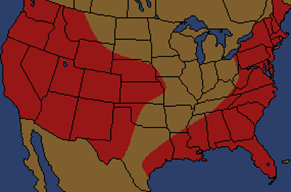 The AccuWeather 1-5 Day Outlook forecasts above-normal temps for the Western half of the US, the East Coast states and Gulf states. The center of the country is expected to be at normal temps.

The 11-15 Day Outlook forecasts above-normal temps for the Western and Eastern third of the US, with the Exception of New England, which will be at normal temps, along with the balance of the country.

The 30-Day Outlook forecasts above-normal temps for the Western third of the US and the East Coast states. The balance of the country is projected to be at normal temps.

The 90-Day Outlook predicts normal temps for the entire US, with the exception of Northern New England and part of the Southwest, which are projected to be at above-normal temps.

Severe Weather: Severe storms and even tornadoes are forecast for the Northeast this evening. Flash flooding and hail are expected. In the weekend and into next week, the Jet Stream is bringing cooler weather to the Northeast.  Record heat will be recorded in the West Coast. Dozens of high-temperature records may be broken. At the same time, there may be snow in the Rockies in both Colorado and Wyoming.

Hurricane researchers are predicting stronger storms, similar to Hurricane Laura, as a result of the warming oceans. Chances of a storm becoming a Cat 3 or stronger has gone up 8% since 1978.
(Read More ...) 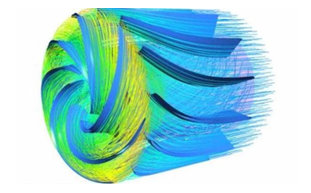 New Energy Storage “Water Battery” Breakthrough: Look Ma, No Underground Powerhouse: For all the excitement over the next big thing in lithium-ion batteries, the simple fact is that plain old water is the only large scale, long duration energy storage medium available today in the US and in many other parts of the world. The challenge is that water batteries — aka pumped hydropower — require expensive new infrastructure, which limits their application. That could be about to change, and it looks like the US Department of Energy is determined to be the change maker.

To get a snapshot of how pumped hydro fits into the national energy profile, let’s go back to last week when The Atlantic published an account of the Energy Department’s ill-fated Interconnections Seam Study under the title and subtitle, “How a Plan to Save the Power System Disappeared: A federal lab found a way to modernize the grid, reduce reliance on coal, and save consumers billions. Then Trump appointees blocked it.”

The Seam study was a wide-ranging, collaborative effort aimed at enabling more electricity to hop back and forth across the US, rather than getting stuck at a “seam” that splits the nation into two grids (Texas, unsurprisingly, has a third electricity grid all to itself). The study is part of the Energy Department’s ongoing grid modernization effort, which comes down heavy on the side of renewable energy and energy storage.

The Atlantic presented the story of the Seam study as a successful attempt to block clean power. Be that as it may, seam or no seam, more renewable energy has been making it onto the grid, partly with support from other Energy Department R&D programs. There is plenty more where that came from, and energy storage will play a larger role in the future as more wind and solar come aboard.

That brings us to the Energy Department’s push for more and better energy storage in the form of pumped hydropower. 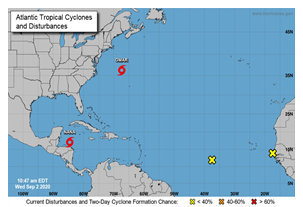 HURRICANE LAURA POSED BIGGEST THREAT TO U.S. OIL IN 15 YEARS. Nearly 300 production platforms were evacuated due to Laura and the prior storm in the Gulf.

Federal officials said that another 16 dynamically positioned rigs, which were not moored to the seafloor, were moved off location due to the storms' projected paths. The storm made landfall in an area that accounts for more than 45% of all U.S. petroleum refining capacity and 17% of oil production, according to the Energy Information Administration.

The storm also affected liquified natural gas operations in Louisiana. “The LNG tankers and all of that stuff will be affected as well as the Mississippi River shipping in addition to the offshore deep-water activity,” said Eric Smith, a professor at Tulane University’s Energy Institute.

A tally by Reuters showed that refiners that produce gasoline and diesel fuel took steps to halt production at nine facilities that process around 14.6% of total capacity in the U.S. While oil prices often spike before a major storm as production slows, consumers are did not see large price changes because the coronavirus pandemic has  decimated demand for fuel.

Wind gusts from the catastrophic storm caused widespread structural damage, particularly in the state of Louisiana. More than 843,000 customers in Texas and Louisiana suffered a power outages.

Fortunately, the impact of the hurricane was not that grave in Texas, as shortly after making landfall it weakened. Nevertheless, the storm did cause power outages and property damages in the state. In particular, as stated by Texas governor Greg Abbott, some of the worst damage was witnessed in the state’s Orange County. Reportedly, this entire county went out of power in the aftermath of the storm.

The effects on energy will be clearer over the next week, as the balance of demand destruction due to outages is juxtaposed with the continued well shut-ins in the Gulf, as well as transportation issues.