The weekly EIA Natural Gas Storage Report advised today that there was an injection of  6B0cf into Underground Storage for the week ending 8/23/19.

This is 3Bcf above the forecast of a 57Bcf injection, the average prediction of sector analysts and traders in the Dow Jones Newswires weekly survey. This compares with an injection of 66Bcf last year and a 57Bcf injection for the five-year average. Storage is 363Bcf above last year for the same week and 100Bcf below the 5-year average. Working gas in storage stands at 2,857Bcf. The September Natural Gas contract closed at $2.23. (Read More ...) 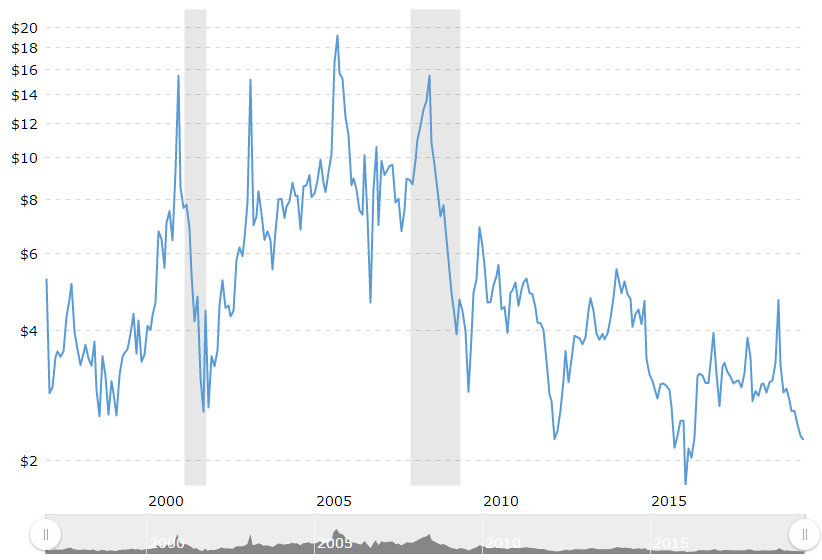 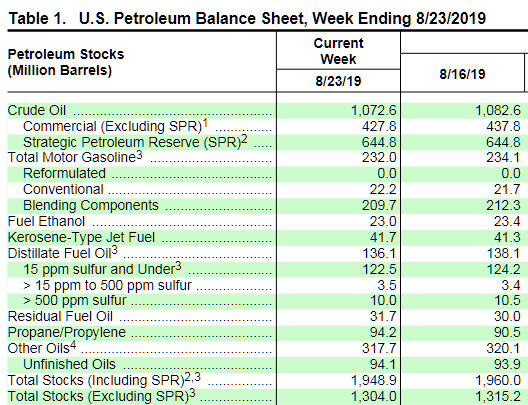 US crude inventories decreased by 10.0 million barrels to 427.8 million for the week ended August 24th, according to data released yesterday morning by the US Dept of Energy. Traders in the Reuters poll projected a decrease of 2.1 million barrel. 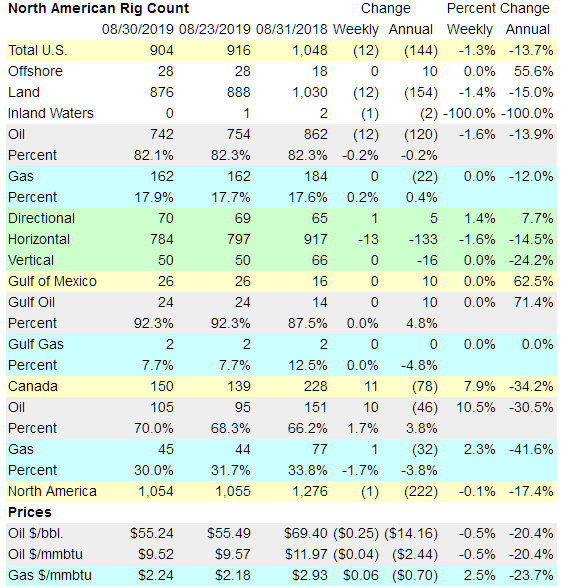 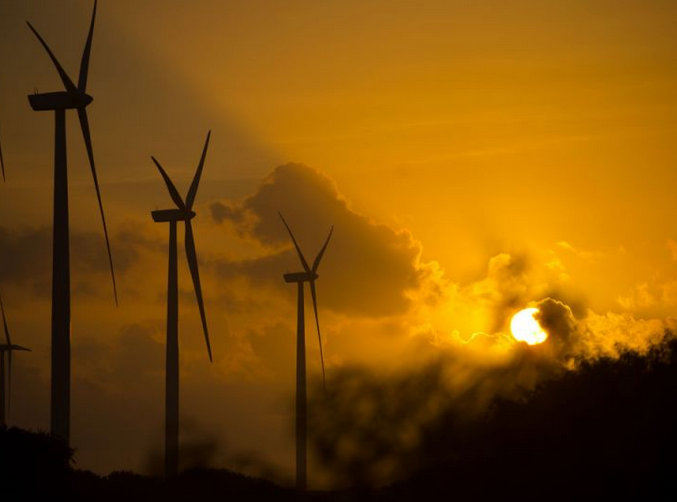 “We’re the No.1 energy producer in the world,” Trump said at the end of a summit of Group of Seven in Biarritz, France. “I’m not going to lose that wealth on dreams, on windmills, which, frankly are not working all that well.”

The comment, in response to a question about climate change, is the latest in a line of statements from the president disparaging wind power. And yet, the U.S. has added more than 15 gigawatts since he took office in 2017, enough to power half of New York state. The industry, meanwhile, now employs more than 110,000 people. Even Energy Secretary Rick Perry touts the benefits of wind, which supplies about 20% of electricity in his home state of Texas.

Trump has said turbines are “monstrous,” are “killing all the eagles” and cause cancer. His comment Monday came after the Energy Department released a report finding employment in the industry has risen to a record 114,000 full-time jobs. It’s also the cheapest new source of electricity (Read More ...)

The AccuWeather 1-5 Day Outlook forecasts above-normal temps for most of the Western US, as well as West Texas and parts of Georgia and Mississippi. The North-Central states are projected to be at  below-normal temps, with normal temps for the balance of the country, including the entire East Coast and Southeast.

The 6-10 Day Outlook forecasts above-normal temps for the West and Northeast, moving down through Ohio, Kentucky and Tennessee to Georgia and Mississippi. The North-central states are projected to be at below-normal temps with the balance of the country at normal temps.

The 30-Day Outlook shows above-normal temps for Northwest and the East Coast from Maine to South Carolina, with the balance of the country at normal temps. 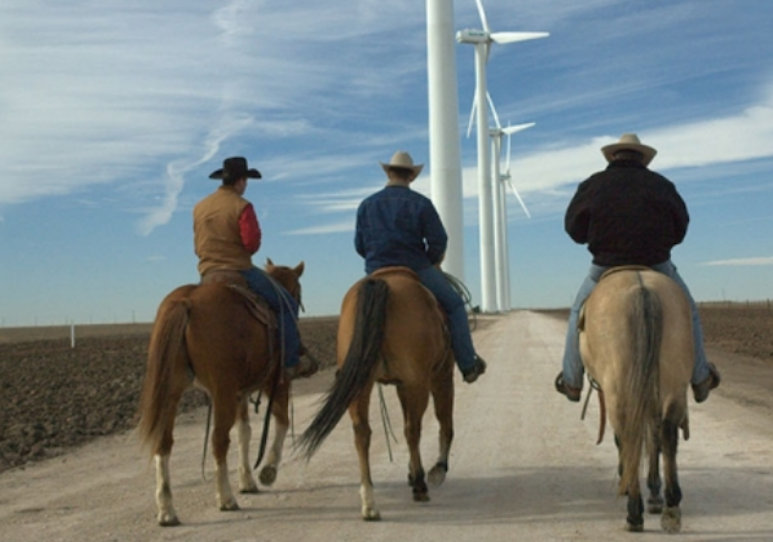 Way to Dump All The Good News About Wind Power On A Friday Afternoon, DOE: The US Dept of Energy buried some good news about the US wind industry earlier this month, and now all of a sudden the floodgates are open. On Friday afternoon the agency promoted three new annual reports recapping the state of US wind power in 2018, including utility scale onshore and offshore wind, and distributed wind. Together, they track the rise of wind power — and the fall of coal.

So what’s with the Friday news dump? After all, releasing major news on a Friday afternoon is a classic PR strategy for burying bad news, and the three new reports are ripe with good news. Well, unless you are someone who promised to save the US coal industry.

Under Secretary of Energy Mark W. Menezes dropped a hint in that direction in Friday’s press release announcing the three reports, stating that “this Administration has proven that we can pursue renewable energy advancements and deployment, particularly wind energy resources.”

In his next breath Menezes hammered home the point with this comment: “U.S. offshore wind is poised to be a significant part of our comprehensive energy portfolio in the coming years.” (Read More ...) 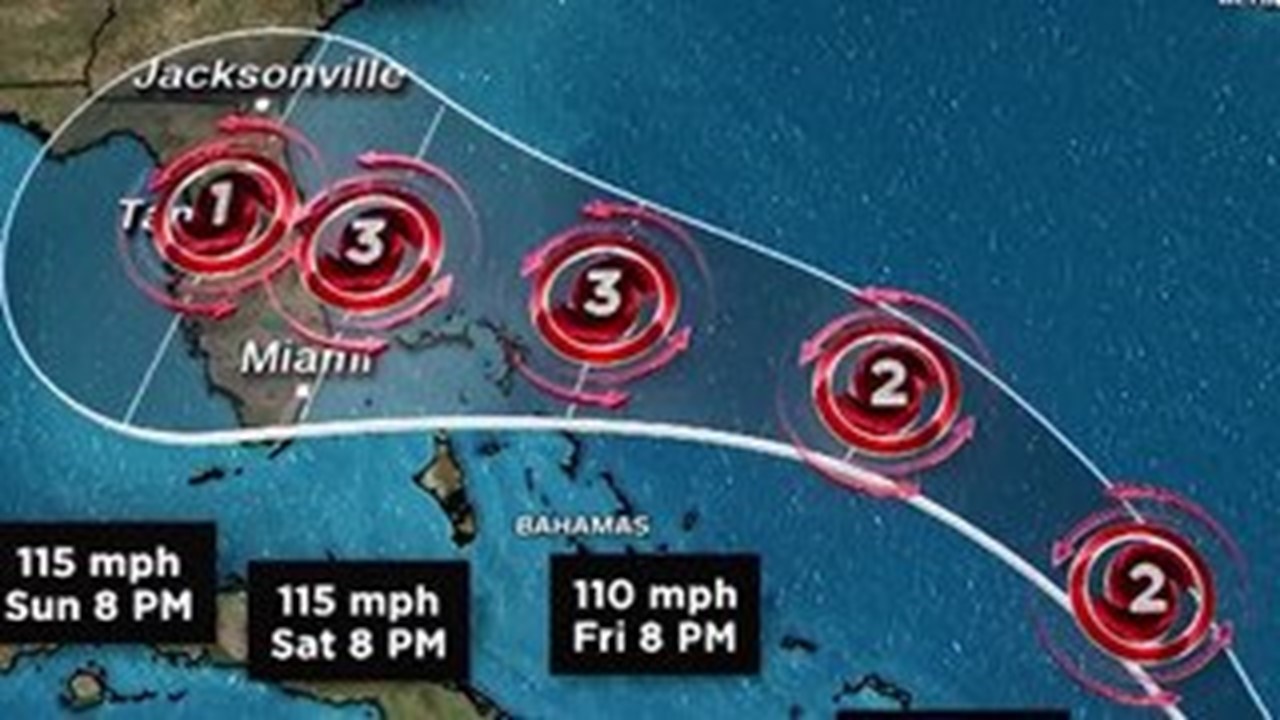 Currently, the center of Hurricane Dorian is pointed to the middle of Florida. It is not yet known whether it will travel south into the Gulf of Mexico or move north into Georgia and inland.

Two outcomes that affect Natural Gas and Electricity are possible. In the first, the hurricane does not enter the Gulf but causes widespread power outages in Florida and Georgia. In this instance, it would create what is called "demand destruction" due to downed power lines and therfore drive down the price of Natural Gas and therefore electricity. In the second instance, the storm could move into the Gulf, picking up power and cause crude and Natural Gas drilling rigs to be shut-in. The storm could also affect Henry Hub, the place where Natural Gas is entered into the US pipeline system from Gulf drilling.

It is difficult to predict which way Natural Gas prices will turn until the direction of the hurricane is known. Stay tuned!