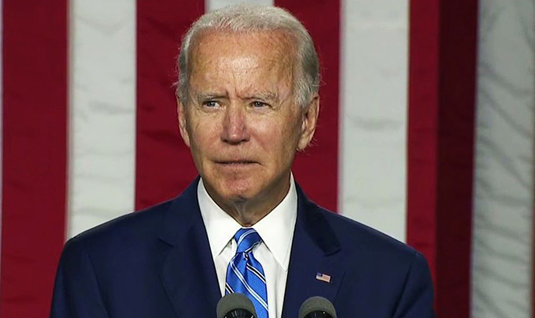 The picture above shows Presidential Candidate Joe Biden, whose National Energy Platform is being hailed by green energy enthusiasts and decried by petrochemical supporters. For more information, see "Geopolitical" and "This Week's Takeaways" below.

The weekly EIA Natural Gas Storage Report advised today that there was an injection of 43Bcf into Underground Storage for the week ending 8/14/20.

This is 6Bcf below the forecast of a 49Bcf injection, the average prediction of sector analysts and traders in the Dow Jones Newswires weekly survey. This compares with an injection of 56Bcf last year and a 44Bcf build for the five-year average. Storage is 595Bcf above last year for the same week and  442Bcf above the 5-year average. Working gas in storage stands at  3,375Bcf.
(Read More ...) 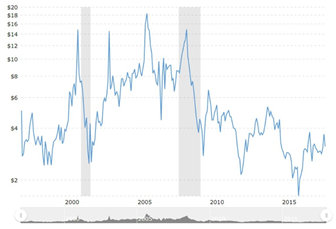 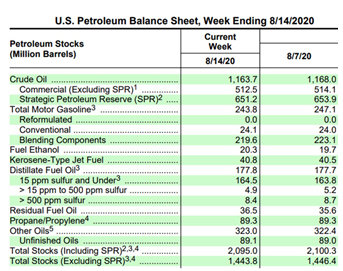 US crude inventories (EIA)  decreased by 1.6 million barrels to 512.5 million for the week ended August 14th, according to data released yesterday morning by the US Dept of Energy. Traders in the Reuters poll expected a decrease of 2.7 million barrels. 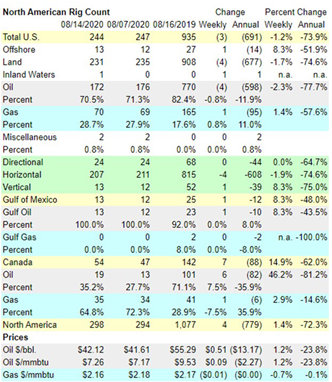 According to the Baker Hughes Count, US Rotary Rigs targeting Natural Gas were +1 at 70 for the week ending August 14th and -95 from last year.

Rigs targeting Crude were -4 at 172. There are 598 fewer rigs targeting oil than last year. Canadian Rigs were +7 to 54 and -88 from last year. US Rigs drilling for oil remain at 71% of all drilling activity. 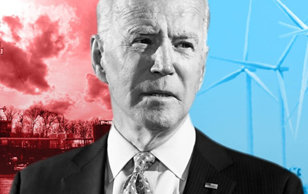 Biden gambles on placing climate change at heart of US energy policy. Republicans say the promise to invest $2T in green energy threatens tens of thousands of jobs in oil and gas sector:

He served in an Obama administration that oversaw a historic surge in American oil and gas production, as shale went mainstream. Tens of thousands of wells were drilled and energy-bearing rocks fractured from North Dakota to Texas. And the industry cheered when the government he was part of lifted a ban on crude exports in 2015. Yet, Joe Biden — armed with a commanding lead in the polls ahead of November’s US presidential election — now promises a root-and-branch overhaul of the American energy system that will put climate change at its heart and which one worried industry adviser describes as “a Tet offensive” on the fossil fuels industry.

The plan, which will be aired again at the Democratic party convention this week, earmarks $2tn in spending over the next four years to use climate policy to drag the economy out of its pandemic-era recession. But Mr Biden’s plans for the energy sector would reach into everything from Middle East geopolitics to the global race with China over clean tech and is likely to prove unpopular among parts of the US electorate — dependent on oil and gas for jobs — in an election year. It stems from an urgency about climate change that has animated much of his party — especially the younger supporters he will need to mobilise. And is made possible by a coming together of factors: drastic falls in clean-energy costs, rapid technological progress, and the devastation of the pandemic, which makes even a $2T plan seem politically viable. “Biden did gain key climate and clean energy provisions in the 2009 stimulus [during the financial crisis]," says Paul Bledsoe
(Read More ...) 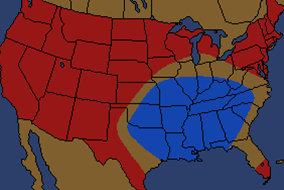 The AccuWeather 1-5 Day Outlook forecasts above-normal temps for Northeast, the Great Lakes area and all of the Western half of the US. A circle of below-normal temps is projected for the Southeast, except for a small circle surrounding it, expected to be at normal temps.

The 6-10 Day Outlook forecasts above-normal temps for the Western half of the US, and the Atlantic Coast, from South Carolina to Maine. The balance of the country is projected to be at normal temps.

The 11-15 Day Outlook forecasts above-normal temps for the Western half of the US, the Great Lakes area and the Northeast. The balance of the country is projected to be at normal temps.

The 90-Day Outlook shows above-normal temps for the Northeast quarter of the US, the Great Lakes area and much of the Western states, with the exception of the West Coast and Northern-most states. The balance of the country is projected to be at normal temps.

Severe Weather: Isolated severe storms producing wind damage are possible across much of the Southeast, Montana to Colorado, and southern Arizona.  Large hail and damaging gusts may also occur across eastern ND and northwestern Minnesota. Over the next few days, there is risk of a few stronger storms, with some hail and wind that may occur over the North-Central U.S.  A few stronger storms are also be possible over the Southeast, NY and New England (Read More ...) 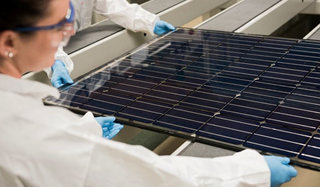 UK firm's solar power breakthrough could make world's most efficient panels by 2021. Oxford PV says tech based on perovskite crystal can generate almost a third more electricity: British rooftops could be hosting a breakthrough in new solar power technology by next summer, using a crystal first discovered more than 200 years ago to help harness more of the sun’s power.

An Oxford-based solar technology firm hopes by the end of the year to begin manufacturing the world’s most efficient solar panels, and become the first to sell them to the public within the next year.

Oxford PV claims that the next-generation solar panels will be able to generate almost a third more electricity than traditional silicon-based solar panels by coating the panels with a thin layer of a crystal material called perovskite.

The breakthrough would offer the first major step-change in solar power generation since the technology emerged in the 1950s, and could play a major role in helping to tackle the climate crisis by increasing clean energy.

By coating a traditional solar power cell with perovskite a solar panel can increase its power generation, and lower the overall costs of the clean electricity, because the crystal is able to absorb different parts of the solar spectrum than traditional silicon.

Typically a silicon solar cell is able to convert up to about 22% of the available solar energy into electricity. But in June 2018, Oxford PV’s perovskite-on-silicon solar cell surpassed the best performing silicon-only solar cell by reaching a new world record of 27.3%.

The crystal was first discovered by a Russian mineralogist in the Ural mountains in 1839 but for the last 10 years scientists around the world have been locked in a race to engineer the mineral to help generate more renewable electricity at a lower cost.

Dr Chris Case, the chief technology officer at Oxford PV, said using perovskite represents “a true change” for solar technology, which has remained relatively unchanged since the silicon-based panels developed in the 1950s.

“Silicon has reached its culmination of capability,” he said. “There are residual improvements to be made, and cost of production opportunities, but from a performance standpoint it is at its efficiency limit. The perovskite material is something totally innovative for solar.” (Read More ...) 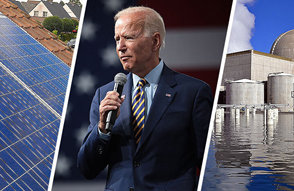 We're in the midst of a big moment in the clean energy transition, but you might not have noticed. Democratic presidential nominee Joe Biden recently proposed a climate and clean energy plan that aims to get the country to net-zero emissions by 2050. The lack of broad-based objection to the plan shows that the idea of net-zero emissions by 2050 has gone from the fringes to near the mainstream of U.S. politics. How did that happen?

Two leading energy policy nonprofits spoke about this: Sonia Aggarwal, vice president at Energy Innovation in San Francisco, and Carla Frisch, a principal at the Rocky Mountain Institute in Colorado.

Aggarwal said the big change has been the growing competitiveness of clean energy, demonstrating that the clean energy transition is a boon to the economy, Aggarwal said. "We are just in such a different place with technology readiness and cost than we were in the last go-around," she said. “Some of the most striking contrasts were between the way politicians talk about the energy transition today and the way they did in 2009, when Congress was debating the Waxman-Markey bill, which would have started a national carbon-trading system. The bill passed the House but never came up for a vote in the Senate.”

In that debate, supporters of the bill said the long-term benefits of carbon trading outweighed the costs of not addressing climate change, but they had to concede that there would be substantial costs in the short-term. Today, the economics have changed so much that this debate would be different in fundamental ways. Utilities have shown that replacing old fossil-fuel plants with wind, solar and battery storage can lead to a net savings for consumers. State and local policies also have changed substantially, with about 1 in 3 Americans living in a state or city that has adopted a plan to get to 100% carbon-free electricity. "We can decarbonize while also delivering incredible economic benefits," Aggarwal said.

Frisch said one of the key factors is that Americans are feeling the effects of climate change much more than before, with extreme heat and weather, which makes the issue seem more real to them. "We know there will be more extreme weather, more extreme storms, more extreme impacts," she said.

Cities, states, corporations and churches have become the leaders in addressing climate change, she said, many with commitments to get to 100% renewable energy and net-zero emissions, helping to push the idea of net-zero emissions into the mainstream, so that Biden's proposal isn't nearly as controversial as it would have been a few years ago.