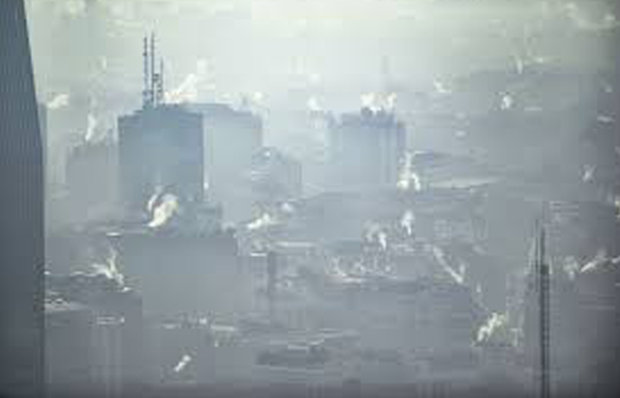 The picture above, taken from the 39th floor of an office tower shows shows air pollution in a major city prior to the Coronavirus pandemic. One US study, by a well-respected group at Harvard University, found that air pollution is linked to far higher Covid-19 death rates across the US. For more information on who's to blame, see "This Week's TakeAway" below.

The weekly EIA Natural Gas Storage Report advised today that there was an injection of 45Bcf into Underground Storage for the week ending 7/10/20.

This is 2Bcf below the forecast of a 47Bcf injection, the average prediction of sector analysts and traders in the Dow Jones Newswires weekly survey. This compares with an injection of 67Bcf last year and a 63Bcf build for the five-year average. Storage is 663Bcf above last year for the same week and 436Bcf above the 5-year average. Working gas in storage stands at 3,178Bcf.
(Read More ...) 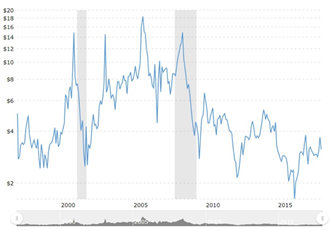 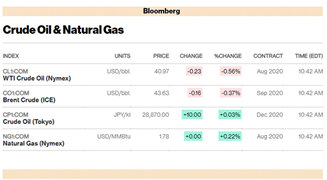 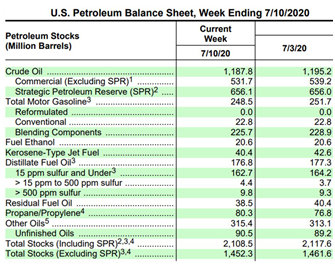 US crude inventories (EIA) decreased by 7.5 million barrels to 531.7 million for the week ended July 10th, according to data released yesterday morning by the US Dept of Energy. Traders in the Reuters poll expected a decrease of 2.1 million barrels. 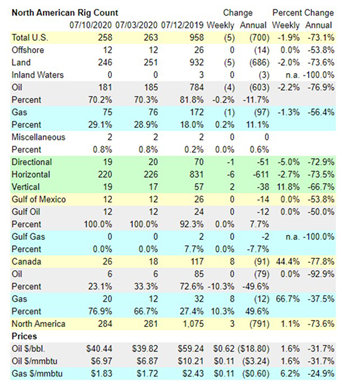 According to the Baker Hughes Count, US Rotary Rigs targeting Natural Gas were -1 at 75 for the week ending July 10th and -97 from last year.

Rigs targeting Crude were -4 at 181. There are 603 fewer rigs targeting oil than last year. Canadian Rigs were 8 to 26 and -91 from last year. US Rigs drilling for oil remain at 70% of all drilling activity. 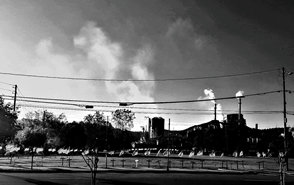 “All Energy Matters,” US Energy Secretary Tells Global Conference: Dan Brouillette, the current Secretary of Energy for the United States, told the IEA Clean Energy Transitions Summit on July 9 that the US favors an “all of the above” strategy when it comes to formulating energy policies for the future. What that means, loosely translated, is the US opposes the push to make renewable energy the central focus of coronavirus economic recovery strategies.

Unlike most officials in the Trump administration, Brouillette is not a graduate of the faux think tanks promoted by Koch Industries and other fossil fuel advocates, but he still peddles the conservative line about how governments shouldn’t be picking winners and losers in the marketplace. Better to let Adam Smith’s unseen hand decide what is best, based solely on market forces.

Sadly, that approach does not take into account the negative impact that burning fossil fuels has on human health and the sustainability of the Earth’s environment. Since the economic engine of capitalism does not assign a value to waste products like carbon dioxide and fine particulate matter, the calculus is distorted to the point where it become meaningless.

Brouillette told the conference, “There is the top down government driven approach and there is the bottom up competition based alternative. I believe the bottom up approach is fully coherent with who we are as democratic societies and nations. My country is abandoning none of our fuels and not one iota of economic opportunity in the quest for a clean energy world. [We support] a bottom up energy philosophy which by regulating less lets us innovate more.” (Read More ...) 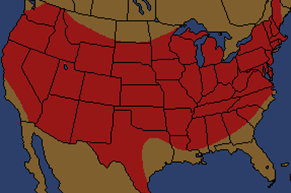 The AccuWeather 1-5 Day Outlook forecasts above-normal temps for the most of the country. Florida, the Gulf states, Georgia, Western California and North Dakota are projected to be at normal temps.

The 6-10 Day Outlook forecasts above-normal temps for most of the country. The Southeast is projected to be at normal temps, as are North Dakota, Arizona and Western California.

The 11-15 Day Outlook forecasts above-normal temps for most of the US, with the exception of the Southeast, Arizona and just a bit of the West Coast, which are expected to be at normal temps.

The 30-Day Outlook shows above-normal temps from the Northeast through Texas and Idaho south to Nevada, with the balance of the US projected to be at normal temps.

The 90-Day Outlook shows above-normal temps for the Northeast quarter of the US and much of the Western states, with the exception of Western California, Oregon and Washington, which will be at normal temps, as will the balance of the US.

Severe Weather: Much of the country will see above-normal precipitation over the next week. Heat advisories remain in the western Southern Plains into the Tennessee Valley with heat indices up to 110 degrees. Severe storms and heavy rain are possible from the Ozarks into the Ohio Valley and western Pennsylvania/New York. Isolated strong to severe storms may occur across parts of the central Plains. There is an enhanced risk of severe thunderstorms in the Western Great Lakes area through the Dakotas. There are currently no storms in the Atlantic Ocean that could become a hurricane (Read More ...) 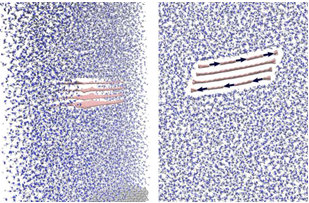 Researchers develop first model to guide large-scale production of ultrathin graphene: Graphene is well-known for its remarkable electronic, mechanical and thermal properties, but industrial production of high-quality graphene is very challenging. A research team at Delft University of Technology (TU Delft, The Netherlands) has now developed a mathematical model that can be used to guide the large-scale production of these ultrathin layers of carbon. The findings were published this week in The Journal of Chemical Physics.

"Our model is the first to give a detailed view of what happens at the micro and nanoscale when graphene is produced from plain graphite using energetic fluid mixing," says Dr. Lorenzo Botto, researcher at the department of Process & Energy at TU Delft. "The model will help the design of large-scale production processes, paving the way for graphene to be incorporated in commercial applications from energy storage devices to in The Journal of Chemical Physics.

"Our model is the first to give a detailed view of what happens at the micro and nanoscale when graphene is produced from plain graphite using energetic fluid mixing," says Dr. Lorenzo Botto, researcher at the department of Process & Energy at TU Delft. "The model will help the design of large-scale production processes, paving the way for graphene to be incorporated in commercial applications from energy storage devices to biomedicine."

Graphene can be made from graphite, which is a crystalline form of pure carbon, widely used in pencils and lubricants, for example. The layers that make up graphite are called graphene and consists of carbon atoms arranged in a hexagonal structure. These extremely thin carbon layers possess remarkable electrical, mechanical, optical and thermal properties.

A single layer of graphene is about 100 times stronger than the strongest steel of the same thickness. It conducts heat and electricity extremely efficiently and is nearly transparent. Graphene is also intrinsically very cheap, if scalable methods to produce it in large quantities can be developed. Graphene has attracted much attention over the past decade as a candidate material for applications in a variety fields such as electronics (Read More ...) 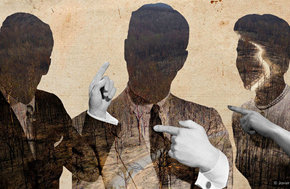 Who is really to blame for climate change? We know that climate change is caused by human activity, but pinning down exactly who is responsible is trickier than it might seem. One of the most frustrating things about the climate crisis is that the fact that earlier action could have prevented it. With every passing year of inaction, the emissions cuts needed to limit global warming to relatively safe levels grow steeper and steeper.

Many groups have been accused of being at blame for this ongoing lack of action, from fossil fuel companies and wealthy countries, to politicians, rich people and sometimes even all of us.
Others may feel it’s not useful to blame anyone. “If you want to engage with the non-converted and get them to want stronger climate action, blaming them is not going to be a very fruitful pathway,” says Glen Peters, research director of the Center for International Climate and Environment Research in Oslo.

Whether we label it blame or not, the question of who is responsible for the climate crisis is a necessary one. It will inevitably impact the solutions we propose to fix things.

But it’s also important to acknowledge that allocating emissions to someone – the extractors of fossil fuels, the manufacturers who make products using them, the governments who regulate these products, the consumers who buy them – does not necessarily mean saying they are responsible for them.

For example, many people across the world lack access to a steady, clean electricity supply and instead use high-emission diesel generators to generate electricity. You can allocate these emissions to the people using the generators, but it is hard to say they are to blame for them.

“You’re just slicing through the system at one end of the supply chain versus the other,” says Julia Steinberger, professor of ecological economics at the University of Leeds. “That alone is not enough to allocate blame.”

What examining each of these links of the supply chain does do, however, is allow us to understand this complex system differently, she adds.

But ultimately what is important is understanding who holds the power over the choices available to everyone else. By challenging how, and for whom, that power is gained and used, perhaps we can begin to shed light on how to truly turn things around on climate.