The weekly EIA Natural Gas Storage Report advised today that there was an injection of  89Bcf into Underground Storage for the week ending 6/28/19.

This is 4Bcf above the median forecast of an 85Bcf injection, the average prediction of sector analysts and traders in the Dow Jones Newswires weekly survey. This compares with an injection of 76Bcf last year and a 70Bcf injection for the five-year average. Storage is 249Bcf above last year for the same week and 152Bcf below the 5-year average. Working gas in storage stands at 2,390Bcf. (Read More...) 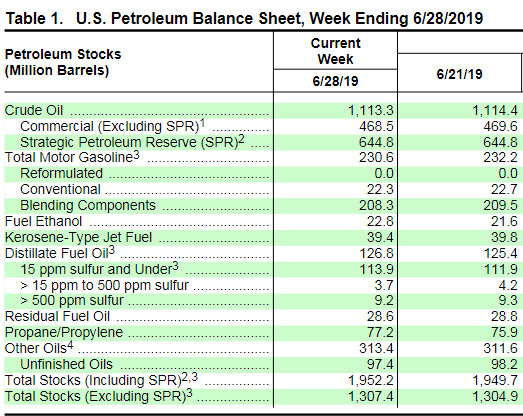 US crude inventories decreased by 1.1 million barrels to 468.5 million for the week ended June 28th, according to data this morning by the US Dept of Energy. Traders in the Reuters poll projected a decrease of 3.7 million barrels. 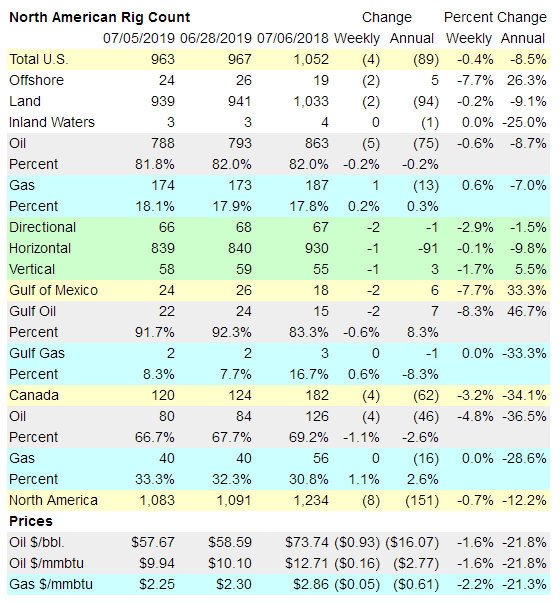 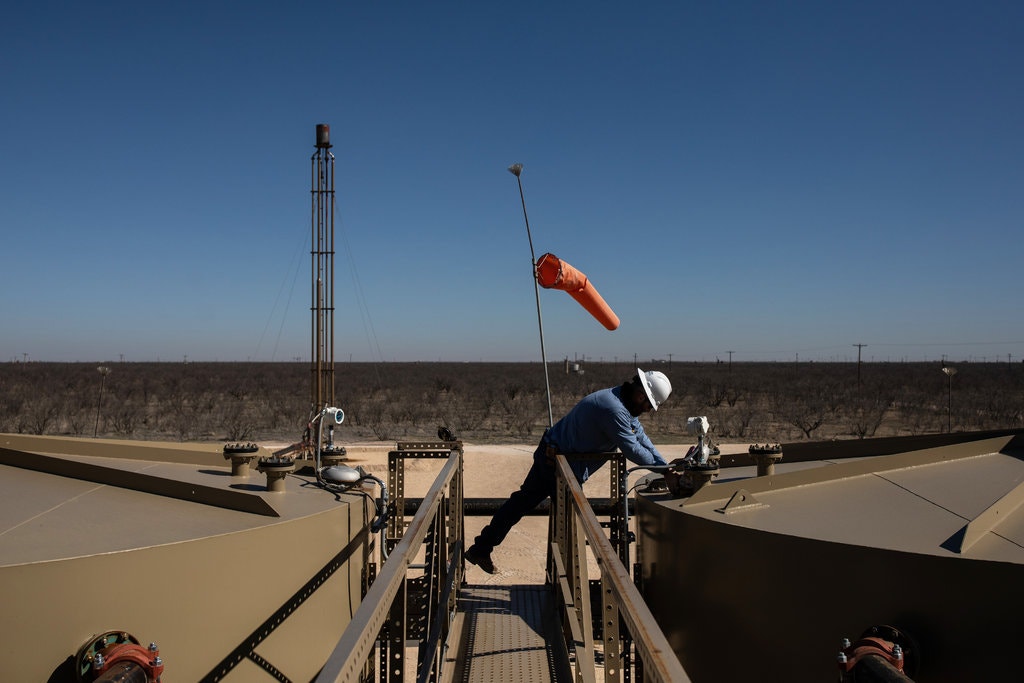 Yet the companies themselves are finding little to love about this seeming bonanza. With a global glut driving down prices, many are losing money and are staying afloat by selling assets and taking on debt.

The value of oil and gas stocks as a proportion of the S&P 500 over the last six years has dropped to about 4.6%, from 8.7%.
“It’s really a psychological punch in the gut,” said Matt Gallagher, chief executive of Parsley Energy, which has productive shale fields in the Permian Basin of Texas and New Mexico and has tripled output over the last three years. His company’s shares have tumbled to about $19 a share, from $38 in late 2016. “There’s a lot of risk in this industry, people are working very hard, and we feel we have made the right moves and it doesn’t show up in the share price.” (Read More...)

The 6-10 Day Outlook forecasts normal temps for most of the Eastern half of the US with a circle of below-normal temps running in the Midwest. The West shows a mixture of temps with the far Northwest at above-normal temps.

11-15 Day Outlook forecasts mostly normal temps for the Eastern and Southern states, with a large circle of below-normal temps in the center of the US.. The West is projected to be at above-normal temps.

The 90-Day Outlook projects normal temps for entire US, except the Northeast, from North Carolina to Maine and the far Northwest, which are forecast at above-normal temps. The Eastern US will see triple digits.

This Crazy Idea Could be the Future Of Power Generation: Carbon capture and storage or reuse is gaining traction amid intensifying efforts to curb the effect of climate change on the planet. Now, a Swiss-Norwegian team of researchers has gone a bold step further: they are proposing using CO2 as fuel in the production of methanol, to be used as an energy source instead of fossil fuel derivatives.

In a paper published in the Proceedings of the National Academy of Sciences of the United States, the team details their idea as follows:

“We propose a combination of largely existing technologies to use solar energy to recycle atmospheric CO2 into a liquid fuel. Our concept is clusters of marine-based floating islands, on which photovoltaic cells convert sunlight into electrical energy to produce H2 and to extract CO2 from seawater, where it is in equilibrium with the atmosphere. These gases are then reacted to form the energy carrier methanol, which is conveniently shipped to the end consumer.”

Interestingly, this is the second recent floating island idea. In April, UN-Habitat showcased a project for a sustainable system of linked floating islands that could sustain communities of up to 300 people each. Yet in the case of the floating energy production facilities, the idea came from the the Norwegian government.

Speaking to Newsweek, one of the authors of the paper, Andreas Borgschulte, said the Norwegian government had asked the scientists to find a way to move fish farms further into the open sea. There, however, these farms would need to produce their own energy, hence the floating “power plants.” (Read More...) 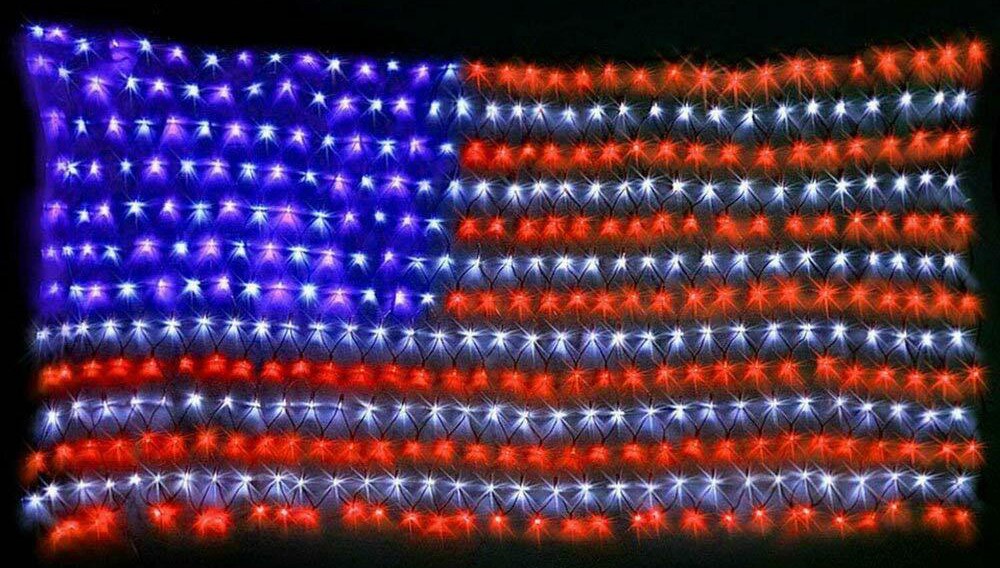 With the imminent birthday of America tomorrow, a brief review of electricity in the USA is probably worthwhile.

We all learned in grade school about the famous kite experiment by American Founding Father and inventor, Benjamin Franklin. In 1752, to prove that lightning was electrical, he flew a kite during a thunderstorm.

He tied a metal key onto the string and, as he suspected it would, electricity from the storm clouds flowed down the string, which was wet, and he received an electrical shock. Franklin was extremely lucky not to have been seriously hurt during this experiment, but he was excited to have proven his idea.

Throughout the next hundred years, many inventors and scientists tried to find a way to use electrical power to make light. In 1879, the American inventor Thomas Edison was finally able to produce a reliable, long-lasting electric light bulb in his laboratory.

By the end of the 1880s, small electrical stations based on Edison's designs were in a number of U.S. cities. But each station was able to power only a few city blocks.

By 1939 the percentage of rural homes with electricity had risen to 25%. Next were electric appliances like stoves and washing machines. Families of that time found that these helpful electric appliances made their lives much easier. Today, Americans' standard of living has risen as nearly everyone has electric power at home, school and at work. With the movement over the past decade of replacing fossil fuels with sustainable, efficient, clean energy, the United States has moved well beyond Mr. Franklin's dreams.