The International Energy Agency (IEA) has reported that since the start of the Covid pandemic, CO2 emissions worldwide have dropped by almost 8%, stunning scientists. While the reduction will probably be short-term, it is a huge drop in pollutants in the atmosphere. For more information, see "Geopolitical" below.

The weekly EIA Natural Gas Storage Report advised today that there was an injection of 109Bcf into Underground Storage for the week ending 5/1/20.

This is 4Bcf above the forecast of a 105Bcf injection, the average prediction of sector analysts and traders in the Dow Jones Newswires weekly survey. This compares with an injection of 96Bcf last year and a 74Bcf build for the five-year average. Storage is 796Bcf above last year for the same week and 395Bcf above the 5-year average. Working gas in storage stands at 2,319Bcf.
(Read More ...) 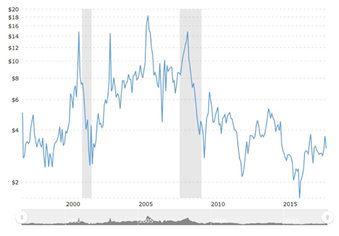 As of 9:51AM CST, June 2020, (the prompt month) Natural Gas was trading at $1.94, +$0.06 from one week ago and the 1-Year Spread average was $2.54, -$0.02 from one week ago. Note: Conditions are in place that could lead to a lingering uptrend. We have the dampening of demand destruction due to the easing of Covid lockdown restrictions and lower production. 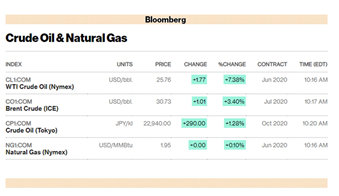 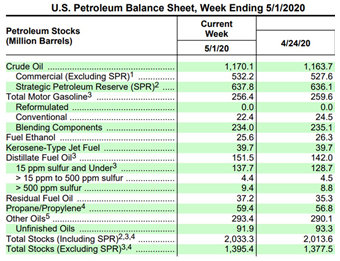 US crude inventories (EIA) increased by 4.6 million barrels to 532.2 million for the week ended May 1st, according to data released yesterday morning by the US Dept of Energy. Traders in the Reuters poll projected an increase of 8.8 million barrels. 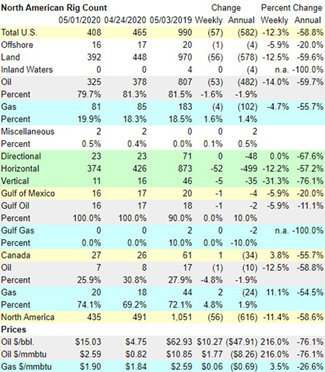 According to the Baker Hughes Count, US Rotary Rigs targeting Natural Gas were -4 at 81 for the week ending May 1st and -102 from last year. 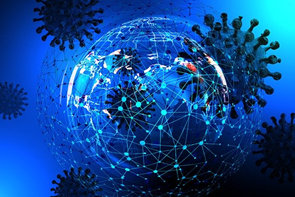 The COVID-19 pandemic is the “biggest shock to the global energy system in more than seven decades” according to a new report from the International Energy Agency: Based on an analysis of more than 100 days of real data so far this year, the IEA’s Global Energy Review states that the drop in energy demand this year will “dwarf the impact of the 2008 financial crisis and result in a record annual decline in carbon emissions of almost 8%”.

Coal and gas demand have been hardest hit by the effects of the pandemic, however the report highlights that renewables have so far been the energy source most resilient to lockdown measures.

“Amid today’s unparalleled health and economic crises, the plunge in demand for nearly all major fuels is staggering, especially for coal, oil and gas. Only renewables are holding up during the previously unheard-of slump in electricity use.”

Birol added that while “it is still too early to determine the longer-term impacts…. the energy industry that emerges from this crisis will be significantly different from the one that came before”.

The report’s projections of energy demand and energy-related emissions for 2020 are based on assumptions that the lockdowns implemented around the world in response to the pandemic are progressively eased in most countries in the coming months, accompanied by a gradual economic recovery (Read More ...)

The AccuWeather 1-5 Day Outlook forecasts above-normal temps for the West Coast states, Nevada, Arizona, New Mexico and Southwest Utah. The  balance of the country is projected to be at at below-normal temps with the exception of a sliver of normal temps, running from Idaho through West Texas.

The 11-15 Day Outlook forecasts above-normal temps for most of the US with the Western and Far-Northern states projected to be at normal temps.

The 90-Day Outlook shows above-normal temps for the Western third of the US, as well as Florida and the Eastern part of the Carolinas. The balance of the country is projected to be at normal temps.

Severe Weather: Very little precipitation is forecast for the next week in the US. There will be some rain in Texas and surrounding states, moving North through South Dakota. The Southeast will also see rain over the next few days but less that one inch is projected. In fact, there is an elevated risk of fires in Oklahoma and Northern Texas. There are no other threats in the continental US
(Read More ...) 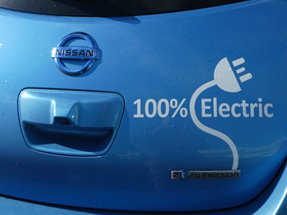 Is the future of EV charging bidirectional? German carmaker Volkswagen (VW) recently announced an aggressive plan to go head-to-head with energy companies by tapping a projected 350 gigawatt-hours of storage capacity from its electric car batteries. Volkswagen’s move signals not only a pivot toward EVs going mainstream, but also a potential fundamental change to EV business models.

“Bidirectional charging is likely to become an important feature to assist the adoption of electric vehicles,” said Kevin Mak, Principal Analyst in the Automotive Practice at Strategy Analytics.  “Already, we are seeing the formation of partnerships between auto makers, power suppliers and platform providers, to provide the benefits of bidirectional charging to fleets and consumers.”
But how does this work? When an EV is charged, AC (alternating current) energy from the grid is converted to DC (direct current) energy to be stored in the car battery. This is normally carried out by the car’s own converter inside the vehicle. If you want to use that energy stored in the EV’s battery to run your house or send it back to the grid, the DC energy stored in the car must be extracted and then converted back to AC energy.

That energy conversion wasn’t possible until the introduction of bidirectional charger technologies. These technologies make it possible for cars like the Nissan Leaf to be used as a backup storage system and a source of energy in your home’s energy ecosystem.

The bet by Volkswagen means that other mainstream automakers will likely follow suit, enabling new areas of functionality, which would give consumers new useful features in their vehicles and give automakers new areas of business to enter.

As we move toward this future of bidirectional EV charging, there are three key elements that need to happen for its widespread adoption. First, automobile manufacturers need to introduce more vehicles that are capable of bidirectional charging. Second, industry regulation and the energy economy must be adapted to provide standardization and a viable business model. Finally, EV charging station manufacturers need to develop more accessible bidirectional charging technology for scale (Read More ...) 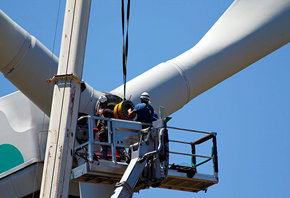 Continuing on the theme of Renewables and Sustainable Energy, the U.S. Energy Information Administration (EIA) has reported that for the first time in recorded history, renewables have overtaken coal in electricity generation every day in a single month. It measured the time between March 25 and May 3, but the trend is expected to continue.

In today's world, the high cost of coal typically means that it is the first fuel choice cut by utility companies when demand is down; renewables are cheaper to operate and often backed by clean-energy regulations. In April, coal-fired generation held just 15.3% of the market share, a massive decrease.

According to IEEFA, January marked the first time in decades — and possible in the entire history of the U.S. power industry — that coal's market share fell below 20%. In 2008, it held over half of the market.

IEEFA predicted that renewable energy in the U.S. could exceed coal annually in 2021, but is now hopeful the pandemic could accelerate the change — despite the Trump administration's efforts to revive the coal industry. (While we're at it, why don't we bring back VHS tapes?)

In addition to promising more jobs for the coal industry, President Trump has also continuously voiced his distrust of renewables, specifically wind power, saying the wind "only blows sometimes."
"I never understood wind," the president said last year. "I know windmills very much. I've studied it better than anybody. I know it's very expensive... They're noisy. They kill the birds. You want to see a bird graveyard? Go under a windmill someday. You'll see more birds than you've ever seen ever in your life."

But wind and solar power have become incareasingly more efficient and affordable in recent years.

According to the EIA, while electricity consumption overall is expected to fall 3% this year, coal-fired power demand is projected to feel the brunt of the decline, potentially falling 20%. Renewables, however, are expected to grow 11% due to their low operating costs, the EIA predicts.