The formerly unthinkable drop in oil prices below $0 a barrel on Monday is still reverberating through financial markets, as supply overwhelms demand destroyed by the coronavirus pandemic, forcing some energy companies into possible bankruptcy as storage reaches maximum capacity. For more information, see "This Week's Take-Away" below. 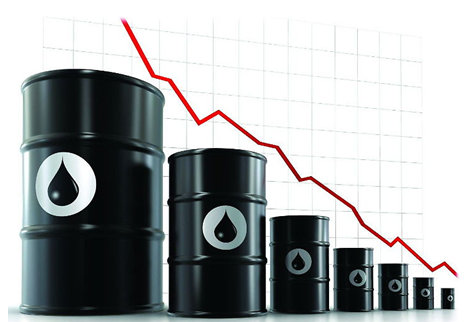 The weekly EIA Natural Gas Storage Report advised today that there was am injection of 43Bcf into Underground Storage for the week ending 4/17/20.

This is 4Bcf above the forecast of a 39Bcf injection, the average prediction of sector analysts and traders in the Dow Jones Newswires weekly survey. This compares with an injection of 92Bcf last year and a 49Bcf build for the five-year average. Storage is 827Bcf above last year for the same week and 364Bcf above the 5-year average. Working gas in storage stands at 2,140Bcf.
(Read More ...) 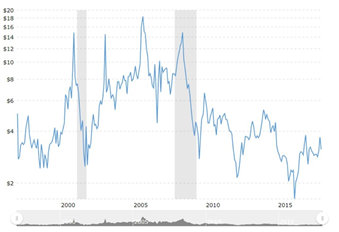 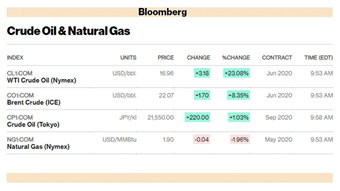 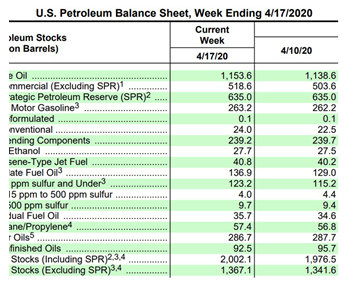 US crude inventories (EIA) increased by 15.0 million barrels to 518.6 million for the week ended April 17th, according to data released yesterday morning by the US Dept of Energy. Traders in the Reuters poll projected an increase of 15.1 million barrels. 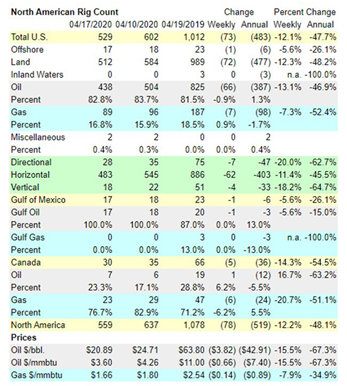 According to the Baker Hughes Count, US Rotary Rigs targeting Natural Gas were -7 at 89 for the week ending April 17th and -98 from last year. 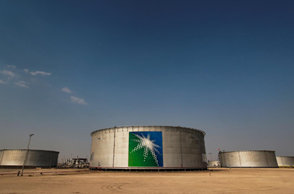 LONDON/NEW YORK/MOSCOW (Reuters) - Saudi Arabia is looking into re-routing millions of barrels of oil onboard tankers sailing to the United States if President Donald Trump decides to block imports of crude from the Kingdom, shipping and trade sources say.

Some 40 million barrels of Saudi oil are on their way to the United States and due to arrive in the coming weeks, piling more pressure on markets already struggling to absorb a glut of stocks, according to shipping data and sources.

U.S. officials have said in recent days that Washington is considering blocking Saudi shipments of crude oil, or putting tariffs on those shipments, adding to difficulties for the cargoes now on the water.
Shipping sources said the kingdom had tried to seek storage options for the cargoes from tanker owners when the ships were chartered last month, but many pushed back given booming rates and not wanting tied up vessels.

Two sources said Saudi Arabia was looking into whether it could re-route the cargoes elsewhere if the United States halted imports. Saudi Arabia’s state oil company Saudi Aramco (2222.SE) declined to comment. Oil traders active in European and Asian markets said there was expectation that the Saudis would look to divert the cargoes to other markets if a ban was imposed, in a move that would then put huge pressure on storage tanks in those two regions.

“Europe looks full, but surely if the Saudis offer it at really cheap levels, buyers would take it,” a source with an international trading firm said.

“Some still have storage spaces or may agree to float it for some time.” A source at a separate oil trading firm active in Asia said they expected many of the barrels that were bound for the United States to flow to the region if exports were blocked. The slump in demand triggered by the novel coronavirus and the hunt for storage options had prompted the United States to consider such action (Read More ...)

The AccuWeather 1-5 Day Outlook forecasts above-normal temps for the Western half of the US, as well as all states bordering the Gulf of Mexico. The Northeast quarter of the country is projected to be at below-normal temps, with the balance of the country at normal temps.

The 11-15 Day Outlook forecasts above-normal temps for the Western half of the US, as well as all states bordering the Gulf of Mexico, Georgia and South Carolina. The Northeast quarter of the country and Great Lakes area are projected to be at below-normal temps, with the balance of the country at normal temps.

The 30-Day Outlook shows above-normal temps for the Western quarter of the US, West Texas and the states bordering the Gulf of Mexico. The Northern-most part of the states around the Great Lakes and New England are projected to be below normal, with the majority of the US at normal temps.

Severe Weather: Another round of severe weather is possible for millions across the South today, a day after powerful storms and tornadoes were blamed for several deaths in Texas, Oklahoma  and Louisiana.

Severe storms developing today will bring the threat for large hail, damaging wind, flash flooding and large tornadoes to the Southeast and N Florida, with the danger increasing as night falls (Read More ...)

Experimental condensed matter physicists in the Department of Physics at the University of Oklahoma have developed an approach to circumvent a major loss process that currently limits the efficiency of commercial solar cells.

Solar cells convert the sun's energy into electricity and are the main component of solar panels and many types of electrical devices as broad-ranging as satellites and calculators.

Members of the Photovoltaic Materials and Devices Group, led by OU associate professor in the Homer L. Dodge Department of Physics and Astronomy, Ian Sellers, along with theorists at Arizona State University, led by David K. Ferry, have demonstrated a breakthrough toward the development of a hot carrier solar cell.

A hot carrier solar cell is a device that would increase the efficiency of solar cells by more than 20%, which Sellers said would be a significant breakthrough for solar energy.

"Although this device has been the source of a considerable amount of research over the last 10 to 15 years, the realization of a practical solution has thus far eluded researchers with proof-of-principle demonstrations only presented under unrealistic conditions or in materials and structures not relevant for solar cell operation," said Sellers.

Sellers says this new approach, recently published in the journal Nature Energy, demonstrates "significant progress in the realization of the hot carrier solar cell and the potential for ultra-high-efficiency single-junction semiconductor devices, which would revolutionize the field of photovoltaics and renewable energy generation." (Read More ...)

Of all the wild, unprecedented swings in financial markets since the coronavirus pandemic broke out, none has been more jaw-dropping than Monday’s collapse in a key segment of U.S. oil trading.

The price on the May futures contract for West Texas crude that is due to expire today fell into negative territory — minus $37.63 a barrel. Sellers were actually paying buyers to take inventory off their hands. The reason: With the pandemic bringing the economy to a standstill, there is so much unused oil in storage and pipelines that American energy companies are running out of room to store it. And if there’s no place to put the oil, no one wants a crude contract that is about to come due.

Underscoring just how acute the concern over the lack of storage is, the price on the futures contract due a month later settled at $20.43 per barrel. That gap between the two contracts is by far the biggest ever.

“The May crude oil contract is going out not with a whimper but a primal scream,” said Daniel Yergin, a Pulitzer Prize-winning oil historian and vice chairman of IHS Markit Ltd.

“Refiners are rejecting barrels at a historic pace, and with U.S. storage levels sprinting to the brim, market forces will inflict further pain until either we hit rock bottom or COVID clears, whichever comes first, but it looks like the former," said Michael Tran, managing director of global energy strategy at RBC Capital Markets.

Production cuts in the country are gaining pace, but it isn’t happening quickly enough to avoid storage filling to maximum levels. Crude explorers shut down 13% of the American drilling fleet last week. It is not enough.