The photo below shows The OPEC (Organization of the Petroleum Exporting Countries) headquarters in Vienna, Austria. OPEC moved this week to stabilize the price of oil, world-wide. For more on OPEC's historic deal signed this week, see "Geopolitical" below. 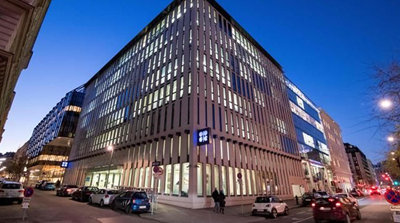 The weekly EIA Natural Gas Storage Report advised today that there was am injection of 73Bcf into Underground Storage for the week ending 4/10/20.

This is 13Bcf above the forecast of a 60Bcf injection, the average prediction of sector analysts and traders in the Dow Jones Newswires weekly survey. This compares with an injection of 73Bcf last year and a 27Bcf build for the five-year average. Storage is 876Bcf above last year for the same week and 370Bcf above the 5-year average. Working gas in storage stands at 2,097Bcf.

In January, 2020, total natural gas exports were the highest for any month since EIA began tracking monthly exports in 1973. (Read More ...) 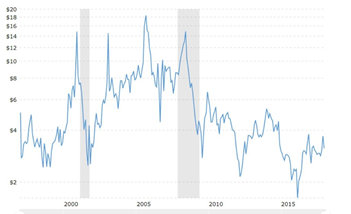 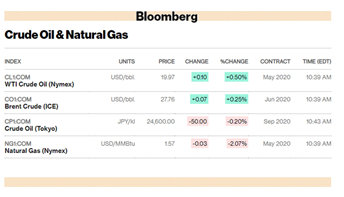 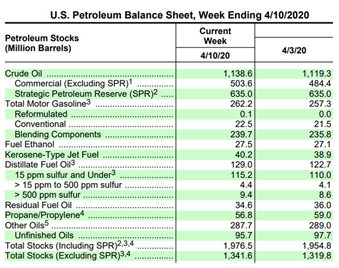 US crude inventories (EIA) increased by 19.2 million barrels to 503.6 million for the week ended April 10th, according to data released yesterday morning by the US Dept of Energy. Traders in the Reuters poll projected an increase of 11.7 million barrels. 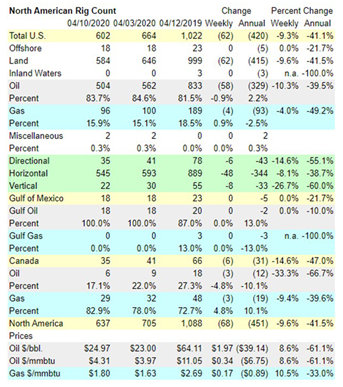 According to the Baker Hughes Count, US Rotary Rigs targeting Natural Gas were -4 at 96 for the week ending April 10th and -93 from last year. 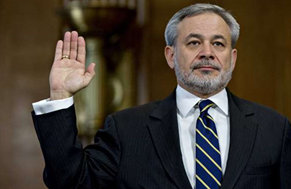 The historic deal reached by OPEC and its oil-producing allies to cut production has worked to “stem the tide, stem the damage that was being done to the market,” since the onset of the coronavirus pandemic and the Saudi Arabia-Russia oil price war, U.S. Energy Secretary Dan Brouillette told CNBC.

Oil prices are down more than 55% year-to-date, having experienced the worst price plunges in nearly two decades in the face of record supply, disappearing storage space and global demand eviscerated by coronavirus lockdowns around the world. But they would be even lower if no agreement had been reached, Brouillette told CNBC’s Hadley Gamble via phone interview Tuesday.
“Think about what would have happened in the alternative had there been instead of a cut of 10 million on the part of OPEC and OPEC+, what if that number had been zero, what would we be looking at today suggests that it’s probably something much lower than where we are,” he said. “And I think we may be at a floor. I think the intent of this conversation with OPEC and the rest of the G-20 countries is simply to do exactly that, to mitigate.”

An early victim of the oil price crash has been the U.S. shale industry, which is now hemorrhaging jobs as highly-indebted oil producers in the U.S. begin filing for bankruptcy.  Up to 240,000 oil-related jobs in the U.S. will be lost this year, according to consultancy firm Rystad Energy.

Saudi Arabia slashed its oil selling prices and increased production after Russia refused to join its plan to further cut output and boost prices in early March. With the two countries reversing course on oil policy in order to pursue greater market share, many suspected the moves were targeting U.S. shale, whose production would largely cease to be economically viable once prices fell below around $50 per barrel. U.S. benchmark West Texas Intermediate is now trading at less than $20 per barrel (Read More ...)

The AccuWeather 1-5 Day Outlook forecasts above-normal temps for all states bordering the Gulf of Mexico as well as Washington, Oregon and Northern California. The Northeast quarter and North Central states are projected to be at below-normal temps, cutting south all the way to Northern Texas. The balance of the country is forecast to be at normal temps.

The 6-10 Day Outlook forecasts above-normal temps for the the Southeast, Texas, all states directly above Texas and the West Coast. The Northeast and Great Lakes areas are projected to be at below-normal temps, with the balance  of the country at normal temps.

The 11-15 Day Outlook forecasts above-normal most of the nation. Montana and North Dakota are projected to be at below-normal temps, with the balance of the North-Central and Northwest states at normal temps.

The 30-Day Outlook shows above-normal temps for the Southeast, South Texas, Nevada, Idaho,Oregon and Eastern California The balance of the country will be at normal temps except for the far- North Central states, which are projected to be at below-normal temps.

The 90-Day Outlook shows above-normal temps for Eastern US, as well as West Texas, Arizona, New Mexico, Arizona, Nevada, Oregon, Idaho and Eastern California. The center of the country is projected to be at normal temps.

Severe Weather: Heavy thunderstorms and tornadoes ravaged the Southeast this past week causing massive damage. Heavy thunderstorms will hit Eastern Texas on Saturday. The entire Southern part of the country will see some precipitation beginning Saturday but little projected for next week across the nation. Temps from April to June are predicted to be near or above average across the US, according to an outlook released last Thursday (Read More ...)

The economy is experiencing some major shifts as a result of the coronavirus outbreak. As people stay in their homes and businesses close, many industries across the globe are now in recession. At the same time, a select few markets are experiencing something of a heyday.

While the current need for restaurants and airlines is diminishing, this isn't true of every service. If you work from home now, you've seen first-hand how demand for web-based platforms like Zoom is rising. So, where does all this leave the renewable energy market?

The success of the sustainable energy industry is challenging to determine at this time. While it has some of the same obstacles to overcome as other industries, there are also some promising signs. Depending on the global response to COVID-19, this time could either make or break the renewable energy market.

As you might've guessed, people are using less energy now. Electricity consumption in the U.S. and Europe has declined by around 5%, while in India, it went down 18.4%. This drop in electricity usage impacts renewables in two significant ways.

First of all, with overall lower energy consumption, green electricity companies aren't getting as much income. Secondly, with less usage, the need for clean energy isn't as prominent. The economic advantage of renewables isn't as relevant when people aren't paying as much for fossil fuels as usual.

Another obstacle to renewable energy's growth is the falling price of crude oil. The COVID-19 outbreak heavily contributed to the recent oil price collapse, which led to dropping gas prices. Fossil fuels are now far cheaper than they were, which may make people hesitant to switch to green energy.

Construction and manufacturing have both slowed, which impacts many other industries, including renewables. Many green energy projects may now have to pause as they don't have the necessary workers or materials. As global production slows down, so does the supply chain, which leads to bottlenecks.

Thanks to supply chain bottlenecks, many renewable energy companies now have fewer materials. Without enough parts, they can't continue to produce things like solar panels or wind turbines as quickly. With slowed production, green energy companies can't make as much money (Read More ...)

NRG Energy signed 1,300 MW of solar power purchase agreements (PPAs) in Texas last summer, thanks to Texas retail competition policies that create favorable conditions, says Travis Kavulla, NRG Energy’s vice president of regulatory affairs. Yet those conditions are missing in the 13 other states that have retail competition, “where utility incumbents still dominate,” he said. (Those other states are shown in the map above.)

In the other 13 states with retail choice in the Northeast and Midwest, program attributes have created roadblocks that prevent retail power providers from signing solar PPAs or otherwise securing long-term power supply, says a report from Wind Solar Alliance, which Kavulla calls “a major contribution to the conversation.”

As a result, although many retail choice states have policy goals to increase renewables generation, their retail providers are not in a position to help meet those goals, said Kevin O’Rourke, executive director of the Wind Solar Alliance.

The report gives Texas a grade of “A” for affording retail providers an incentive to invest in generation resources, including low-cost renewables, while three other states considered in case studies—New Jersey, Maryland and Pennsylvania—receive far lower grades.

In Texas, retail suppliers are not pitted against an incumbent utility that may have an advantage. As end-users shift from one REP to another,  the load cannot shift away from the REPs back to an incumbent utility, because there is none, which is not the case in other states.