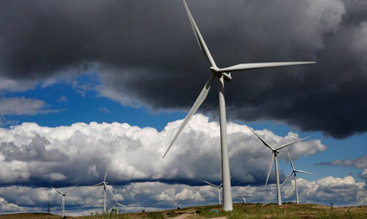 The photo above shows cloudy skies ahead for US renewable energy projects. Tax credits for building utility-scale wind and solar projects expire on December 31 of this year. Additionally, fossil fuels are extremely inexpensive and the slow-down in energy usage due to Covid-19 make investment in wind turbines and solar farms more speculative. For more, see "This Week's Take-Away" below.

The weekly EIA Natural Gas Storage Report advised today that there was a draw of 19Bcf from Underground Storage for the week ending 3/27/20.

This is 8Bcf below the forecast of a 27Bcf draw, the average prediction of sector analysts and traders in the Dow Jones Newswires weekly survey. This compares with an injection of 6Bcf last year and a 19Bcf draw for the five-year average. Storage is 863Bcf above last year for the same week and 292Bcf above the 5-year average. Working gas in storage stands at 1986Bcf. (Read More ...) 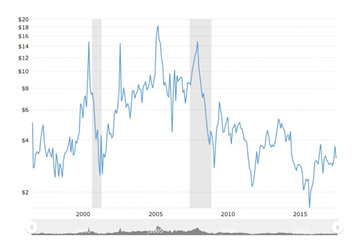 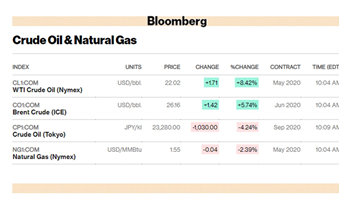 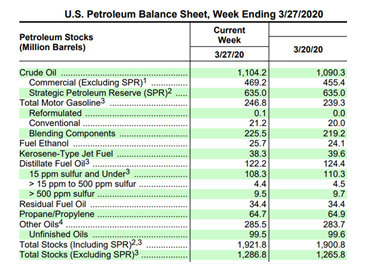 US crude inventories (EIA) increased by 13.8 million barrels to 469.2 million for the week ended March 27th, according to data released yesterday morning by the US Dept of Energy. Traders in the Reuters poll projected an increase of 4.0 million barrels. 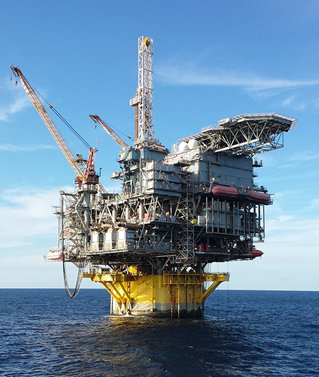 According to the Baker Hughes Count, US Rotary Rigs targeting Natural Gas were -4 at 102 for the week ending March 27th and -88 from last year. 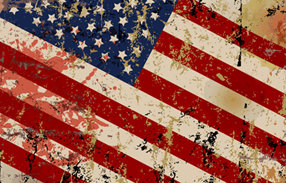 The United States’ energy dominance is now under direct threat.

That’s according to an open letter sent to U.S. Secretary of State Mike Pompeo on March 25, which was signed by six U.S. senators.

“During this time of pandemic and global economic crisis, the Kingdom of Saudi Arabia has chosen to settle scores in the oil market,” the senators stated in the letter.

“Riyadh’s motivation may be multi-faceted – to punish the Russians, to capture near-term market share, to destabilize long-term investment in American energy – but the end result is the same,” the senators added.

“Our nation’s energy dominance, which President Trump has carefully nurtured over the past three years, is now under direct threat from a country that professes to be our ally,” the senators continued.

The senators went on to say that Saudi Arabia “must change course” and noted that the Kingdom “risks its bilateral relationship with the United States”.

Saudi Arabia was also encouraged to leave OPEC “immediately” and join the U.S. as a “free market energy powerhouse” in the letter, which warned that the U.S. “retains enormously powerful tools” at its disposal.

“In addition to the various types of aid and assistance we already provide – none of which should ever be offered perpetually and unconditionally – we are reminded of the levers of statecraft the Administration is empowered to exercise,” the senators stated.

“From tariffs and other trade restrictions to investigations, safeguard actions, sanctions, and much else, the American people (Read More ...)

The AccuWeather 1-5 Day Outlook forecasts above-normal temps for The Eastern two-thirds of the US with the exception of Southern Florida and the East Coast. The Northwest is projected to be at below-normal temps, while the balance of the country is forecast to be at normal temps.

The 6-10 Day Outlook forecasts above-normal temps for the Eastern two-thirds of the US, as well as Texas and the Eastern half of New Mexico. Below-normal temps are projected for the Northwest, Nevada, Utah and Arizona, with the balance of the country, including New England at normal temps.

The 11-15 Day Outlook forecasts above-normal temps for the Western half of California, all states bordering the Gulf of Mexico and the East Coast states up through Virginia. The North-Central states are projected to be at below-normal temps with the balance  of the country at normal temps.

The 30-Day Outlook shows above-normal temps for the Southeast, South Texas, Western Nevada, New Mexico and Eastern California, while the balance of the country will be at normal temps.

The 90-Day Outlook shows above-normal temps for most of the Eastern half of the US, West Texas, Arizona, New Mexico, Arizona, Nevada, Oregon and most of California. New England and the rest of the country are projected to be at normal temps.

Severe Weather: Texas, Louisiana, California and Idaho are projected to have above-normal precipitation for the next 1-5 days. Southern Texas will see heavy thunderstorms. The South-Central states will see rain over the next few days, moving North through Southern Illinois (Read More ...) 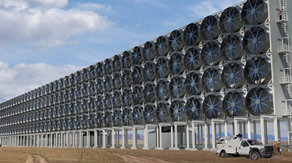 The missing puzzle piece for getting to 100% clean power (It’s about using renewable energy to make gas.)

Across the country, dozens of cities and states have passed laws or resolutions targeting 100 percent carbon-free electricity — most recently 20 communities in Utah and the state of Virginia.

But is it even possible to power a modern economy with a carbon-free grid? And if so, what are the best energy sources and technologies for getting there?

These questions have been the source of raging debate among energy wonks for many years but have moved closer to mainstream political discourse since the introduction of the Green New Deal. (For a brief introduction to the terms and players involved in the debate over 100 percent clean electricity, see here and here.)

Now there is a growing list of jurisdictions that face stringent emissions targets in years ahead and urgently need to figure out answers. We’ll discuss the most notable such jurisdiction, California, and a cool new(ish) technology that may help it reach its 100 percent target.

First, though, let’s look at the problem to be solved: the dilemma that comes with an energy grid run mostly on renewable sources of energy.

Renewable energy needs dispatchable generation and long-term storage: The core issue is variability. Whereas fossil fuel power plants can be turned up or down to meet demand (they are “dispatchable,” in the lingo), the big sources of renewable energy — sun, wind, and water (hydropower) — cannot. They come and go on nature’s schedule. Sun disappears each night and on cloudy days. Wind and precipitation vary daily and seasonally. All three show longer-term variations over years and decades.

All these variations in supply cannot be controlled by power grid managers, so they must be accommodated.

To some extent, sun, wind, and water balance one another out; where it is not sunny, it is often windy. With a good national transmission system, renewables could supply up to 60% to 80% of electricity in the US, but after that, things get expensive and something else is needed to fill the gaps.

But what? Coal plants emit carbon, so they can’t be part of a clean grid. Nuclear plants are not very good at gap-filling — they are big, relatively slow, and expensive to ramp up and down. (Though nuclear proponents argue they are better than they’re given credit for.) (Read More ...) 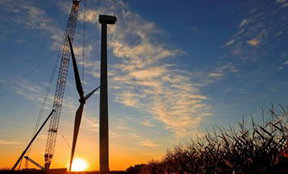 Global renewables expansion in 2020 will be 'wiped out' by Covid-19:  A slow-down is likely in worldwide wind and solar build-out due to coronavirus-spurred movement restrictions and contraction in currency markets.

The momentum-building global expansion of wind and solar power plant could be stymied for at least year as government restrictions on movement impact construction timeframes and foreign exchanges market contract around the world, according to new forecast by Rystad Energy.

The Norwegian analyst group calculates growth in newly commissioned renewables projects will now be “wiped out” for 2020 and cut by a further 10% next year, reversing its pre-Covid-19 expectation of some 140GW of PV and 75GW of wind capacity being added this year.

“Renewable energy projects expecting to achieve financial close or break ground globally will not avoid taking a hit from Covid-19’s effect on the economy,” said Rystad Energy, in its latest research note.

“Movements in the foreign exchange market [could] cause companies to pause contracting key components, which are typically procured in US dollars, [with] renewable projects in Australia, Brazil, Mexico and South Africa especially impacted, as projects in the procurement phase face capital cost increases of up to 36% due to the rapid depreciation of local currencies in these countries.”

After a year in which solar and wind had seen 126GW and 71GW of new plant commissioned, respectively, Rystad Energy had been forecasting year-on-year increases in capacity additions of 15% and 6% in these two renewables markets.

The impact of the coronavirus pandemic could be felt “even more” from 2021, said Rystad Energy’s product manager for renewables, Gero Farruggio, as fewer financial investment decisions are taken due to capital expenditure reductions.

“The foreign exchange impact will decimate the 2021 outlook for solar installations and the outlook from 2022 and beyond for wind installations, as orders for new equipment will halt from currency-hit emerging countries, which would otherwise account for much of this growth,” he said.

Rystad said that while “the full extent of the impact of Covid-19 on the renewable energy market is just beginning to reveal itself”, it noted that “global shipments have more-or-less arrived as expected, as Chinese panel and turbine suppliers returned to work relatively quickly, and production stabilized”, with projects under construction or in the procurement phase “particularly exposed” when Covid-19 first struck.