The weekly EIA Natural Gas Storage Report advised today that there was a draw of 29Bcf from Underground Storage for the week ending 3/20/20.

This is 1Bcf below the forecast of a 30Bcf draw, the average prediction of sector analysts and traders in the Dow Jones Newswires weekly survey. This compares with a draw of 39Bcf last year and a 40Bcf draw for the five-year average. Storage is 888Bcf above last year for the same week and 292Bcf above the 5-year average. Working gas in storage stands at 2005Bcf. (Read More ...) 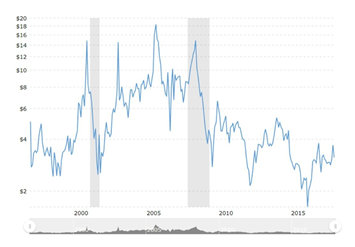 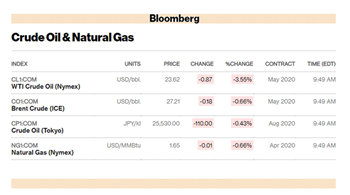 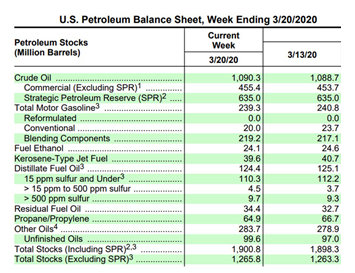 US crude inventories (EIA) increased by 1.6 million barrels to 455.4 million for the week ended March 20th, according to data released yesterday morning by the US Dept of Energy. Traders in the Reuters poll projected an increase of 2.8 million barrels. 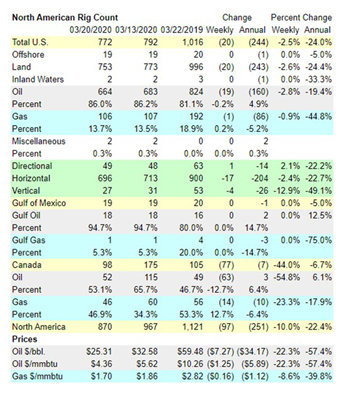 According to the Baker Hughes Count, US Rotary Rigs targeting Natural Gas were -1 at 106 for the week ending March 20th and -86 from last year.

Rigs targeting Crude were -19 at 664. There are 160 fewer rigs targeting oil than last year. Canadian Rigs were -77 at 98 and +7 from last year. US Rigs drilling for oil remain at 86% of all drilling activity. 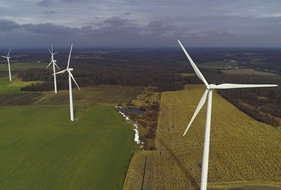 Climate Change Push Fuels Split On Coronavirus Stimulus: Clean energy and climate advocates say the huge stimulus bill Congress is negotiating should address not only the economy, but also climate change. But a split over that appears to have contributed to delays in passing the bill.

"Democrats won't let us fund hospitals or save small businesses unless they get to dust off the Green New Deal," Senate Majority Leader Mitch McConnell said Monday.

McConnell said Democrats were filibustering the $1 trillion-plus bill hoping to include policies such as extending tax credits for solar and wind energy.

The share of solar and wind energy in the U.S. had been booming. But now, without help, the SEIA estimates the solar industry could see as much as 50 percent of residential solar jobs lost this year due to the pandemic. AWEA estimates $43 billion dollars of investments and payments, mostly in the rural communities where wind projects usually are built, is at risk.

"The COVID-19 pandemic is harming the wind industry's ability to build the wind farms envisioned by Congressional legislation and putting at risk 35,000 wind energy jobs," says Tom Kiernan, Chief Executive Officer of AWEA. Policies like these, and the focus should be on addressing the effects of the pandemic. But others argue now is precisely the right time to think about climate change (Read More ...)

The AccuWeather 1-5 Day Outlook forecasts above-normal temps for The Eastern two-thirds of the US. Most of the Western States are projected to be at below-normal temps, while the far-Northwest  and a sliver of the West are forecast to be at normal temps.

The 6-10 Day Outlook forecasts above-normal temps for the Western half of the US, as well as the bottom half of states bordering the Gulf of Mexico and all of Florida. Below-normal temps are projected for the North-Central area of the US, with the balance of the country at normal temps.

The 11-15 Day Outlook forecasts above-normal temps for the Western half of the US, plus Florida. The Northeast is projected to be at below-normal temps with the balance  of the country at normal temps.

The 30-Day Outlook shows above-normal temps for the eastern half of the US, Texas, Nevada, New Mexico and Eastern California, while the balance of the country will be at normal temps, with New England also at normal temps.

The 90-Day Outlook shows above-normal temps for most of the Eastern half of the US, Texas, Arizona, New Mexico, Nevada and most of California. New England and the rest of the country are projected to be at normal temps.

Severe Weather: The Climate Prediction Center’s (CPC) new 90-day outlook could feature a possible continuation of what we’ve seen so far this year: more warmth and more wet weather for the eastern half of the country.

According to the CPC outlook for April, May and June, the Midwest and the East Coast could both be in for more warm and wet weather (Read More ...) 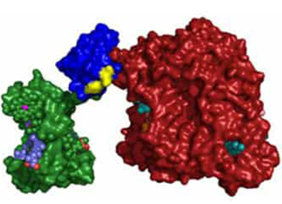 Scientists from the University of Bristol have developed a photosynthetic protein system using both chlorophyll and bacteriochlorophyll to enhance a more sustainable approach to solar-powered technological devices. In doing so, scientists demonstrated the two pigment systems could work together to achieve solar energy conversion.

Lead author of the study and Reader in Biochemistry at the University of Bristol, Dr. Mike Jones, said:
“In the past, two main types of protein have been used for solar energy conversion in technological devices. The first is from ‘oxygenic’ photosynthetic organisms -plants, algae, and cyanobacteria – that contain chlorophyll as their primary photosynthetic pigment and produce oxygen as a waste product of the process. The second is from ‘anoxygenic’ organisms, bacteria that contain bacteriochlorophyll as their primary photosynthetic pigment.“

“We have assembled these two proteins, from very different parts of the photosynthetic world, into a single biological photosystem that enables expanded solar energy harvesting. We have also demonstrated that this system can be interfaced with human-made electrodes to achieve expanded solar-to-electric conversion.”

Scientists purged a reaction center protein from a purple-colored photosynthetic bacterium and a light-harvesting protein from a green plant (actually made recombinantly in E. coli). They locked them permanently together, utilizing a linking domain taken from a second bacterium. The outcome is the leading single complex with a well-defined protein and pigment composition that shows extended solar energy conversation.

Dr. Jones said, “This breakthrough is an example of a synthetic biology approach, treating proteins as components that can be assembled in new and interesting ways using a common and predictable interface.”

“This work shows that it is possible to diversify the protein systems which can be built into devices beyond those which nature supplies, using a simple approach achieved purely through genetic encoding.”

“The next step was to expand the palette of photosynthetic pigments, using proteins from cyanobacteria that contain bilin pigments that absorb yellow and orange light, and to explore linking enzymes to these novel photosystems to use sunlight to power catalysis.” (Read More ...) 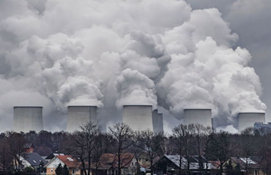 President Trump tried to stop it from happening. The top Republican in the Senate, Mitch McConnell did too.

Despite their best efforts to make good on the president's campaign promise to save the beleaguered coal industry, including an 11th-hour pressure campaign, the Tennessee Valley Authority power plant at Paradise burned its last load of coal in February.

The plant's closure - in a county that once mined more coal than any other in the nation - is emblematic of the industry's decades-long decline due to tougher environmental regulations, a major push toward renewable energy and a rise in the extraction of natural gas. The shuttering of businesses nationwide and a reduced need for energy amid the global coronavirus pandemic threatens to deal coal yet another devastating blow.

"It's not just one 1,000-megawatt unit closing; they're going down all over the place," said John Rogers, a former mine owner who lives in western Kentucky near the Paradise plant, located in Muhlenberg County.

When coal-burning plants close, coal mining loses its best customer. Since 2010, 500 coal-burning units, or boilers, at power plants have been shut down and nearly half the nation's coal mines have closed. No US energy company, big or small, is building a new coal-burning plant.

Employment in the US coal industry is the lowest in decades. Coal mine jobs have dropped by nearly 50 percent in the past decade to about 50,000 - a far cry from the 900,000 workers who were digging in coal mines when the industry hit its peak in the 1920s.

Electric utilities are telling investors and customers that coal costs too much, mostly because of the money it costs to offset environmental effects, such as the release of carbon dioxide. Blackrock, the world's largest asset manager, informed its clients in January that it would no longer invest in companies that get more than 25% of their revenue from burning coal.

Electric utilities - and their customers - have instead embraced renewable energy and cleaner-burning gas burned in combined cycle plants, which have a smaller footprint and about a tenth of the workers of a coal plant.

Former TVA president Bill Johnson, who supported the closure in February 2019, noted that the unit is old and sluggish, and would only run about 10% of the time. "These plants were designed for a time and a system that's far different from what we have today," Johnson said. The TVA spent hundreds of millions of dollars upgrading the plant only to shut it down. The price of progress. 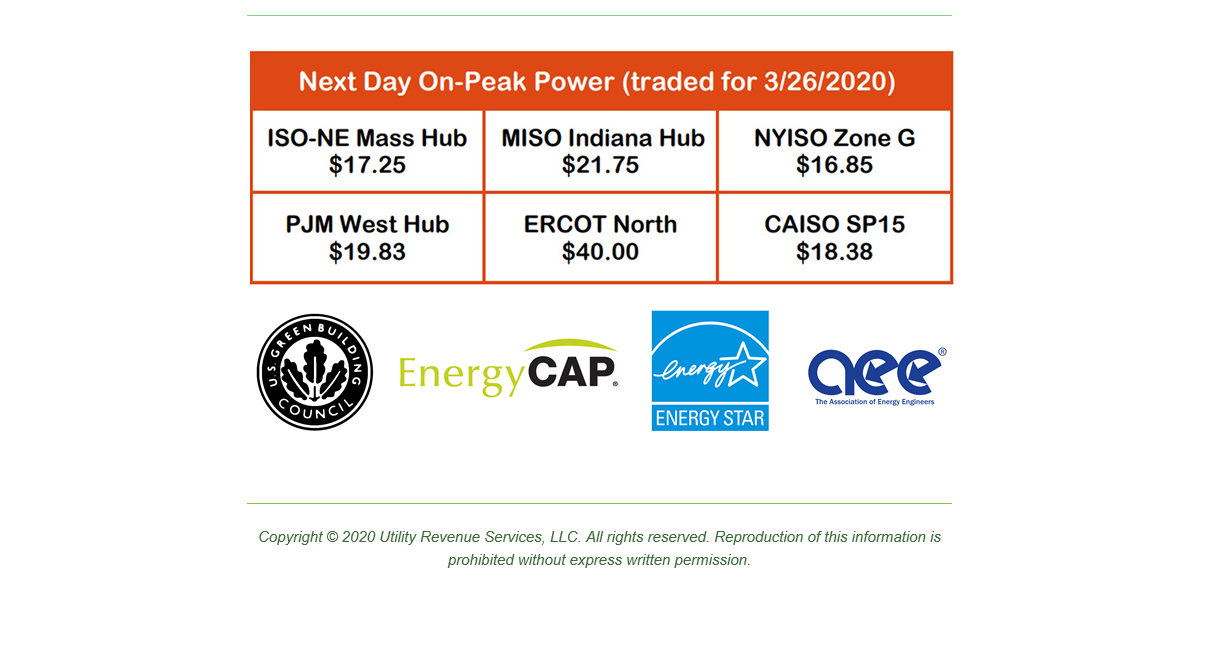