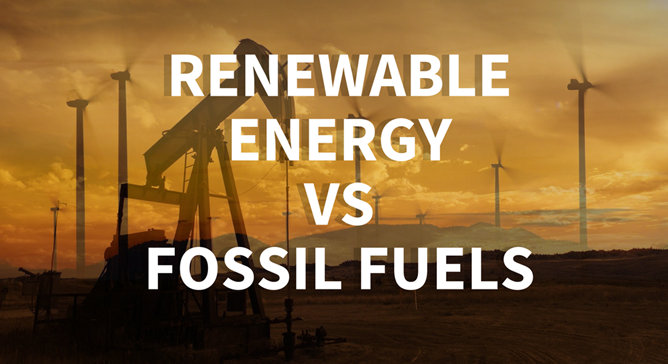 The photo above reminds us that while the drop in the price of petroleum-based products makes it tempting for companies to slow or halt investment in renewable energy, capacity issues will cause a lack of available energy in those areas where older coal or natural gas-based generation is being retired because of poor ROI.

The weekly EIA Natural Gas Storage Report advised today that there was a draw of 9Bcf from Underground Storage for the week ending 3/13/20.

This is 3Bcf above the forecast of a 6Bcf draw, the average prediction of sector analysts and traders in the Dow Jones Newswires weekly survey. This compares with a draw of 91Bcf last year and a 63Bcf draw for the five-year average. Storage is 878Bcf above last year for the same week and 281Bcf above the 5-year average. Working gas in storage stands at 2,034Bcf. (Read More ...) 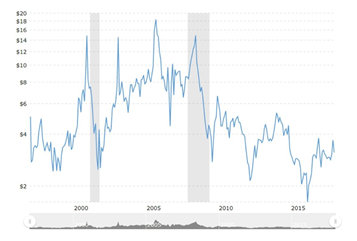 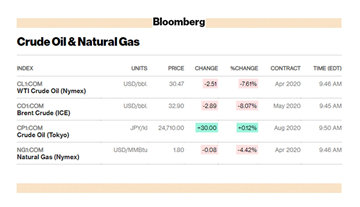 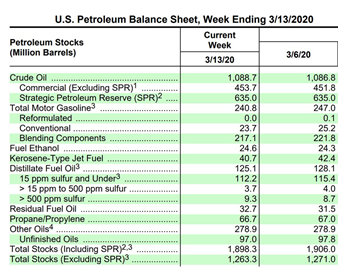 US crude inventories (EIA) increased by 1.9 million barrels to 453.7 million for the week ended March 13th, according to data released yesterday morning by the US Dept of Energy. Traders in the Reuters poll projected an increase of 2.3 million barrels. 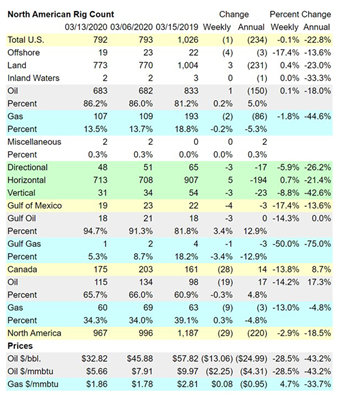 According to the Baker Hughes Count, US Rotary Rigs targeting Natural Gas were -2 at 107 for the week ending March 13th and -86 from last year.

Rigs targeting Crude were +1 at 683. There are 150 fewer rigs targeting oil than last year. Canadian Rigs were -28 at 175 and +14 from last year. US Rigs drilling for oil remain at 86% of all drilling activity. 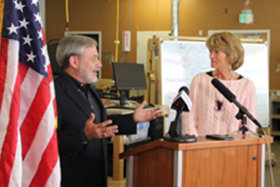 U.S. energy secretary: ‘Topping off’ reserve with U.S. purchases signals confidence in industry: President Donald Trump’s push to refill the country’s oil reserves is intended to reassure domestic producers at a time when collapsed prices are straining the industry and a substantive rebound appears to be months away at the earliest, the nation’s top energy official said in an interview Tuesday.

Trump last week directed the Department of Energy to purchase upwards of 77 million barrels of domestic oil to top off the Strategic Petroleum Reserve.

Energy Secretary Dan Brouillette said by phone that the reserve, or SPR, exists specifically “to mitigate these types of disruptions, if you will, wherever they come from.”

The current price collapse started gradually in early February as traders reacted to lower demand forecasts from China due primarily to the country’s response to COVID-19, which amounted to a major and ongoing slowdown of the country’s massive economy.

The price fall picked up speed earlier this month when Saudi and Russian officials could not agree on curbing production rates to stabilize oil markets in the face of less demand due to the virus curtailing economic activity worldwide. That disagreement quickly turned into a price war, with officials from each side refusing to cut production on the premise they can outlast the other in a time of painfully low prices for each oil-dependent government.

The West Texas Intermediate benchmark price for Lower 48 oil has fallen nearly 40 percent since the end of February to $28.70 per barrel on March 16. Alaska North Slope (Read More ...)

The AccuWeather 1-5 Day Outlook forecasts above-normal temps for The Eastern third of the US, plus Louisiana and East Texas. Most of the Western States are projected to be at below-normal temps, while the center of the country and far-Northwest are forecast to be at normal temps.

The 6-10 Day Outlook forecasts above-normal temps for the Eastern 2/3 of the US, with the exception of the states bordering Canada, from Western New York over. Below-normal temps are projected for the Western quarter of the US, with a small sliver of normal temps running in-between and through the far North.

The 11-15 Day Outlook forecasts above-normal temps for the Southeast of the US, plus Texas and New Mexico, as far north as Illinois and West Virginia.  the balance of the country will be at normal temps, with the exception of the North-Central states, the far-Northwest and Maine, which will be below-normal.

The 30-Day Outlook shows above-normal temps for the eastern half of the US, Texas, Nevada and Eastern California, while the balance of the country will be at normal temps.

The 90-Day Outlook shows above-normal temps for most of the Eastern half of the US, and Nevada. New England and the rest of the country are projected to be at normal temps.

Severe Weather: Significant precipitation will run through the Eastern half of the country over the next few days, with the most severe areas in the East. There will be some snow in the North-Central part of the country, accumulating up to 4-5 inches (Read More ...) 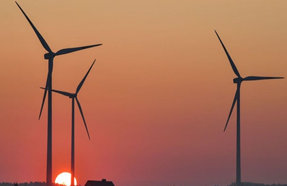 When Rahm Emanuel famously advised not to let another “crisis go to waste,” he lamented that the oil crises of the 1970s came and went without solving our energy woes. As the incoming chief of staff amid the 2008 financial crisis, Emanuel foresaw “an opportunity to do things that you think you could not do before” in clean energy and beyond. That crisis too passed with too little accomplished.

Now a new crisis has arisen. Energy is merely on the periphery this time. Combatting the coronavirus and protecting human lives must be job one. I write these words from a college campus where classrooms are closed for the semester and want nothing more than for students and everyone else to stay safe and well.

I’ll leave it to medical experts to address the health crisis at hand. But those of us in the environmental arena can ponder how recent developments shift the policy landscape for the climate crisis that will remain long after the coronavirus crisis has abated.

First, it’s important not to take the wrong lessons from current events. Emissions will likely dip this year. As China battled the coronavirus, its emissions fell by a quarter. Globally, fewer flights and cruises mean less jet and marine fuels are burned. American energy use will likely decline too as more people stay home.

That mirage of falling emissions shouldn’t let us mistake recession as a solution to climate change. We want economies to be strong for everyone’s sake and to invest in a cleaner tomorrow. Every previous downturn has been followed by a rebound in global emissions. This year’s dip won’t cure our long-term emissions trajectory if we let another crisis go to waste.

Opportunities emerging from the current crisis arise from three main jolts — historically low-interest rates, plunging oil prices, and looming job losses. I’m no market guru, so I can’t foretell whether these will persist. But if they do, they’ll open opportunities to do what has not been done before.

Low-interest rates make it cheaper to invest in clean energy infrastructure. That includes solar and wind farms; transmission lines linking them to cities; charging stations for electric cars; and pipelines to move captured carbon dioxide underground and hydrogen and advanced biofuels to consumers. Building all of these would create lots of blue-collar jobs when the economy may need them most.

Meanwhile, cheap oil could reverberate through other energy markets in counterintuitive ways. Today’s glut of natural gas comes largely as a byproduct of the oil boom. That’s because natural gas bubbles up alongside more lucrative oil. Drillers have been dumping it onto markets at astonishingly low prices. (Read More ...) 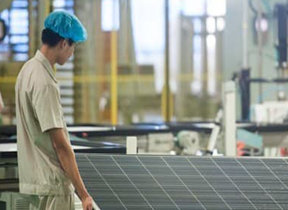 Is The Oil Price Crash Good For Renewable Energy? With Saudi Arabia and Russia pumping flooding the market with oil as coronavirus threatens demand, oil prices have crashed below the $30 mark. It is a price crash that could have profound consequences for the global transition to cleaner energy.

Traditional logic suggests that a low oil price is bad news for renewables energy on several fronts. Firstly, it means lower gasoline and fuel prices which makes electric vehicles and biofuel less competitive. It also means that some oil companies could shift to focus on natural gas production, sending prices down and making solar and wind less competitive as sources of electricity. Finally, the economic impact of the oil price crash on both oil majors and governments is seen as a negative for renewable energy. If governments and oil majors are forced to cut spending, it is likely that renewable investments and subsidies will be among the first to go.

According to Fatih Birol, the head of the International Energy Agency, the oil price crash “will definitely put downward pressure on the appetite for a cleaner energy transition.” Meanwhile, BNEF has reduced its global solar demand significantly due to a looming economic slowdown.

And while renewable investment has been climbing rapidly over the last decade, we had already started to see a slowdown by 2018.

With all of this in mind, it is highly likely that the coronavirus and oil price war will have a short-term negative impact on the global energy transition.

In the long-term, however, there are plenty of reasons to believe that the most recent oil price crash could accelerate the adoption of clean energy. In the last few years, the shift towards conscious capitalism or ESG investing has been one of the most noticeable market trends.

At the same time, renewable energy has become increasingly competitive, with some non-renewable projects struggling for approval due to fears of investments becoming stranded. Now, with oil prices below $30, oil and gas projects can no longer claim to offer higher returns than clean energy projects.

Oil demand and prices will bounce back, and new projects will undoubtedly be needed until a viable clean energy solution is developed. But a second major oil price crash in 6 years highlights the volatility of markets and the value of the stability provided by renewable solutions. With global sentiment shifting away from fossil fuels, clean energy growing increasingly competitive and oil market volatility once again in the spotlight – we may see oil majors and governments redoubling efforts to diversify energy investment. This is especially true in a world that is going to become increasingly vulnerable to pandemics.