The weekly EIA Natural Gas Storage Report advised today that there was a draw of 143Bcf from Underground Storage for the week ending 2/21/20.

This is 12Bcf below the forecast of a 155Bcf draw, the average prediction of sector analysts and traders in the Dow Jones Newswires weekly survey. This compares with a draw of 167Bcf last year and a 122Bcf draw for the five-year average. Storage is 637Bcf above last year for the same week and 179Bcf above the 5-year average. Working gas in storage stands at 2,200Bcf. (Read More ...) 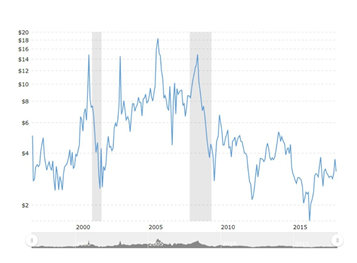 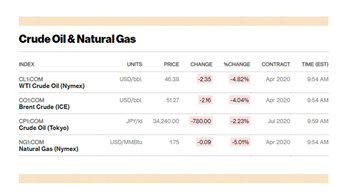 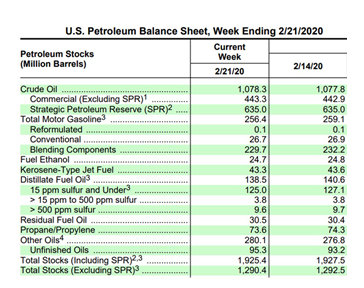 US crude inventories (EIA) increased by 0.5 million barrels to 443.3 million for the week ended February 21st, according to data released this morning by the US Dept of Energy. Traders in the Reuters poll projected an increase of 0.5 million barrels. 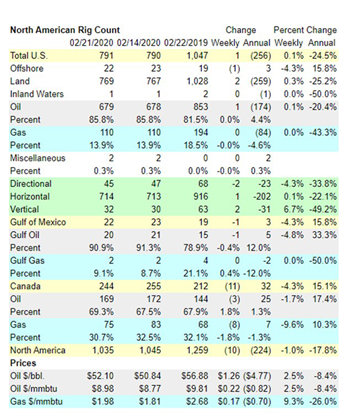 According to the Baker Hughes Count, US Rotary Rigs targeting Natural Gas were unchanged at 110 for the week ending February 21st and -84 from last year.

Rigs targeting Crude were +1 at 677. There are 174 fewer rigs targeting oil than last year. Canadian Rigs were -11 at 244 and +32 from last year. US Rigs drilling for oil remain at 86% of all drilling activity. 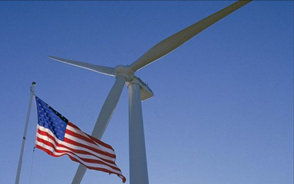 Wind can meet 20% of US energy demand within a decade: The US could generate 20% of its energy from wind within 10 years, without requiring any additional land, according to Cornell University research published in Nature Scientific Reports.
"The US currently produces about 7% of its electricity from wind energy," said Sara Pryor, professor in the Department of Earth and Atmospheric Sciences. "This research shows that a quadrupling of the installed capacity of wind turbines from 2014 levels will allow us to attain the goal of 20% of electricity from the wind, without requiring additional land, or negative impacts on systemwide efficiency or local climates."

Called the "20% Wind Scenario," the NREL report noted that generating 20% of US electricity from wind could eliminate approximately 825 million metric tons of carbon dioxide emissions in the electrical energy sector in 2030.

In context, the US currently uses approximately 310 to 320 terawatt-hours of electricity each month -- generated from coal, natural gas, nuclear and renewable energy power plants.

"Wind energy is already playing a key role in decarbonizing the global energy system," Pryor said. "Wind turbines repay the lifetime carbon emissions associated with their deployment and fabrication in three to seven months of operation and
(Read More ...)

The 11-15 Day Outlook forecasts above-normal temps for most of the US. The Southeast and a sliver of the West Coast are projected to be at normal temps.

The 30-Day Outlook shows above-normal temps for the Southeast, West Texas and Western California. Below-normal temps are forecast for Minnesota and the balance of the US is forecast to be at normal temps.

The 90-Day Outlook shows above-normal temps for the Southern Florida, a circle of states that include West Virginia, Tennessee, Kentucky, Virginia and North Carolina. Additionally, the states along the West Coast, Nevada, Idaho, Arizona, New Mexico and Western Texas are forecast at above-normal temps as well. The rest of the country should be at normal temps.

Severe Weather: Very little severe weather is forecast for the next week although there will be significant precipitation across the center of the country over the weekend (Read More ...) 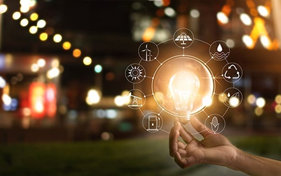 Energy Storage—A Trillion-Dollar Holy Grail: The science of renewable energy is remarkable—the ability to harness nature to magically power our modern world is a seductive vision. And yet, the actual business of renewable energy is late to establish itself as a viable competitor to the petrochemical industry. The problem is rooted in cost parity and the challenges of production, storage, and disposal (Figure 1). To use the industry’s fancier and totally sensible term, it’s the math of levelized cost of energy (LCOE) that we can’t figure out.

LCOE measures the average cost of electricity generation for any power plant—coal, hydro, solar, or thermal—over its lifetime. And it turns out that by the time you harvest the Earth’s minerals to produce, ship, deploy, and maintain a renewable energy plant, it is more expensive to generate power versus burning coal. And that’s too bad because we’re all paying the price.

According to BP’s 2019 Statistical Review of World Energy, annual carbon emissions grew by 2.0%, with China and the U.S. as the largest contributors, and coal took the largest share of all power generation at 38%. No matter where you stand in the debate on climate change, let’s just agree that pollution is bad and coal means a lot of it.

What about renewables? It’s mostly good news, but it’s slow-moving. According to Global Data's  Renewable Energy—Thematic Research, renewable energy will reach a 22.5% share in the global power mix by 2020, up from 18.2% in 2017. Hydro and nuclear grew by 14.5%, and solar generation grew more than 40%. By country, China was the largest contributor to renewables growth, surpassing the entire developed world. Hydroelectric generation increased by an above-average 3.1%, and nuclear generation rose by 2.4%.

It gets even more interesting when you take a closer look at the problem on a systemic level. For the most part, you can’t store renewable energy. Lithium-ion batteries or water reservoirs end up costing more than the power that they store. It is arguable that as long as the renewable energy storage dilemma is not solved, we’re never going to get to a 100% renewables-powered world.

Energy storage is insanely expensive. Lithium-ion batteries are seen as the main renewable energy storage technology, but they are even more costly to produce, procure, maintain, and dispose of than burning fossil fuels. When consumers store electricity in a lithium-ion battery in their home, they generally pay at least $0.30/kWh, while neighbors pay a bargain price of $0.10/kWh for coal-generated power (Read More ...) 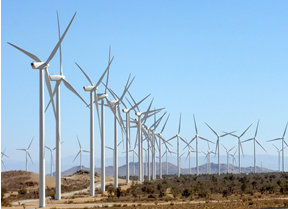 Trouble in Texas is a warning for other states about possible power shortages from sources that depend on the weather:  In recent years, Texas has become a bellwether for advances in wind turbines and renewable energy. The wide-open, windy Texas panhandle offers some of the best wind resources in the country. But some surprising shortfalls have emerged in Texas’ electricity production—and that could prove instructive for other states that are looking to ramp up their reliance on renewable power.

New technologies are undoubtedly helping to make wind and solar power more attractive. But Texas is learning that the transition from baseload power plants to weather-dependent renewables brings unintended consequences—including new costs and complexities that pose challenges for reliability.

In recent years, Texas jumped into the large-scale deployment of wind turbines. And as this subsidized wind generation came online, coal plants found they could no longer compete in the region’s electricity market. However, these were coal plants that had long anchored the state’s energy portfolio. And now, Texas is finding that the loss of this coal capacity, along with a greater reliance on wind power, is leading to power shortages. Additionally, older, inefficient Natural Gas generators have been subject to early retirement for the same reason.

The problem is that these new wind systems are entirely dependent on favorable weather conditions. In contrast, the coal and Natural Gas plants they replaced typically ran non-stop for months at a time. This is not an endorsement of coal or Natural Gas; rather, it is a statement of fact that Texas’ capacity to generate electricity has dropped significantly.

On August 12, 2019, a heatwave drove electricity demand in Texas to an all-time high. Electricity prices across the Texas power grid surged 36,000%, to roughly $65.37/kWh. Not only did electricity demand climb enormously as Texans cranked their air conditioners in 100-degree weather, but electricity generation at Texas wind farms simultaneously fell 50% due to lack of wind.

If Texas were a nation, it would be the 6th largest wind producer in the world. And yet, a lack of power available during peak usage days plagues the state as the reserve margin remains below 10% for power that could be brought online quickly.

While the transition to wind, solar and other sustainable generation continues Forward, Texas and other states must allow for resources that are available as needed as fossil fuel generation is replaced. Otherwise brownouts and blackouts in the state remain an ongoing danger.