The weekly EIA Natural Gas Storage Report advised today that there was a draw of 115Bcf from Underground Storage for the week ending 2/7/20.

This is 2Bcf below the forecast of a 117Bcf draw, the average prediction of sector analysts and traders in the Dow Jones Newswires weekly survey. This compares with a draw of 101Bcf last year and a 131Bcf draw for the five-year average. Storage is 601Bcf above last year for the same week and 215Bcf above the 5-year average. Working gas in storage stands at 2,494Bcf. (Read More ...) 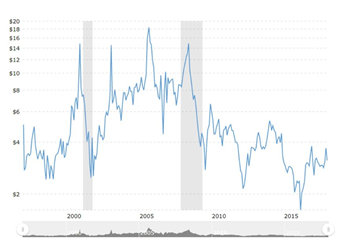 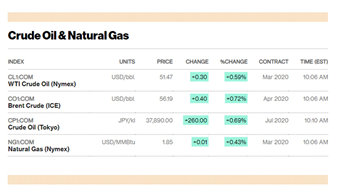 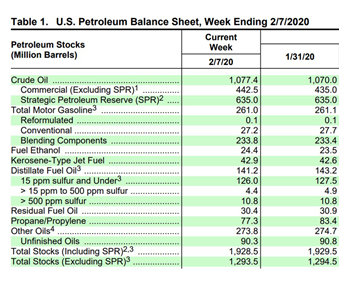 US crude inventories (EIA) increased by 7.5 million barrels to 442.5 million for the week ended February 7th, according to data released yesterday morning by the US Dept of Energy. Traders in the Reuters poll projected an increase of 3.0 million barrels. 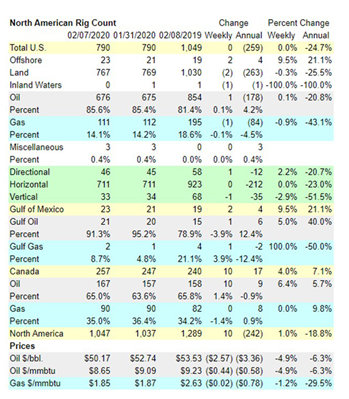 According to the Baker Hughes Count, US Rotary Rigs targeting Natural Gas were -1 at 111 for the week ending February 7th and -84 from last year. 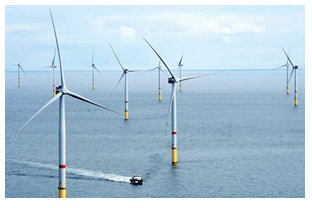 Construction Begins on World’s Largest Offshore Wind Farm... in the UK. UK strikes again by building a 659 MW wind farm beating their own previous record of 630 MW: Energy firm SSE announced on Friday that construction for the 3.6 GW Dogger Bank Wind Farms project had begun. The huge offshore wind farm is located near Ulrome, a coastal village in the East Riding of Yorkshire, England.

SSE further revealed that the farm consists of three 1.2 GW offshore sites: Creyke Beck A, Creyke Beck B, and Teesside A. The project is said to have the capacity to power more than 4.5 million homes per year. It uses GE's Haliade-X wind turbine. The turbine has a 12-megawatt generator and is 260 meters tall.

The project will help the UK's eco-friendly plans. "Dogger Bank Wind Farms will play a critical role in the UK’s effort to achieve net-zero through the use of low-carbon fuel sources," added Wilson.

“This is a really significant project to be involved with, and it’s exciting for us to play a part in delivering support to what will be the world’s biggest offshore wind farm.”

The UK and Europe, in general, are big on offshore wind. According to a report by industry body WindEurope, in 2018, Europe connected 409 new offshore wind turbines to the grid across 18 projects and now has a total installed offshore wind capacity of 18,499 MW.

Countries have been shifting to renewable sources of energy to meet their electricity needs a lot lately. A viable solution in addition to solar and hydropower is harnessing wind energy.

On September 6, 2018, the Walney Extension took the title of the world’s largest offshore wind farm, covering an impressive 145 sq km with 87 turbines from MHI Vestas and Siemens Gamesa.

The wind farm is located in the Irish Sea that is situated near the Walney Island, Cumbria. With the operation of Waley Extension, UK can generate 659 Megawatts of energy, enough to power 600,000 UK homes.

By achieving this gigantic feat, UK has reinstated themselves as the pioneers in offshore wind farming to the world. The Walney Extension contract was signed in 2014, and 3 major proprietors joined hands to bring this dream into fruition.

The title of the world’s largest offshore wind farm was previously enjoyed by the London Array having 630 Megawatt capability. It has 175 turbines, which were capable of producing a net power of 630 MW.

Now, this might spring confusion in your mind as to how an 87-turbine wind farm can generate more power than a wind farm that has over twice its number of turbines.

The answer comes in the form of selecting turbines that are the latest in its class, offering a much higher efficiency than its competition. The 87 turbines in the Walney Extension is bought from two different manufacturing – 40 MHI Vestas 8MW turbines and 47 Siemens Gamesa 7MW turbines (Read More ...) 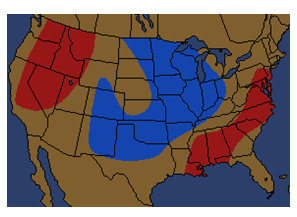 The AccuWeather 1-5 Day Outlook forecasts above-normal temps for the East Coast from Georgia to Pennsylvania, as well as the Northwest, excluding the West Coast. Below-normal temps are expected for the center of the country, from the northern-most states through North Texas. The balance of the US will be at normal temps.

The 11-15 Day Outlook forecasts above-normal temps for the entire country with the exception of Utah, Colorado, Arizona and New Mexico, which are projected to be at normal temps.

The 30-Day Outlook shows normal temps for the Southeast, Louisiana up through Pennsylvania and New Jersey. The states surrounding the western Great Lakes are projected to be at below-normal temps and the balance of the US at normal temps.

The 90-Day Outlook shows above-normal temps for southern Florida, Eastern California, Oregon, Washington state and Southern Arizona and New Mexico. The balance of the country is expected to be at normal temps.
Severe Weather: In the wake of a disruptive winter storm expected to track across portions of the Plains and Midwest, a powerful Arctic front will surge southward from Canada, ushering in the coldest air of the season for some.

So far this winter, most people across the northern Plains, Midwest and Great Lakes have been able to save a few extra dollars on heating costs thanks to the mild weather, but the upcoming forecast will have some heaters working overtime later this week.

Early Wednesday morning, the Arctic air blasted south of the Canadian border into the Plains. Places like Grand Forks and Fargo, North Dakota, observed temperature drops on the order of 20-30 degrees Fahrenheit in the wake of the cold front. Along with the massive drop in temperatures, snow showers and a strong north wind could produce blizzard conditions across the northern Plains. The combination of these two atmospheric disturbances is expected to bring another round of accumulating snow to places like Chicago, Detroit and Cleveland. As the storm slides eastward into the day on Thursday, accumulating snow is expected to track across the interior Northeast.

The Arctic air mass is expected to blast into the Northeast and mid-Atlantic. While the coldest air will remain in place across the interior, many locales along the Atlantic coast can expect a big drop in temperatures as well. "For many areas around the Midwest and Northeast, this air mass will surpass the lowest temperatures of the winter so far by an average of 5 to 15 degrees, even though the mainly unfrozen waters of the Great Lakes will modify the air slightly," according to AccuWeather Senior Meteorologist Alex Sosnowski (Read More ...) 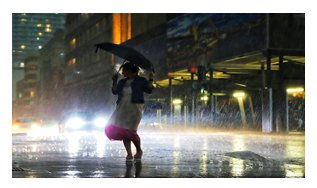 Rain may soon be an effective source of renewable energy. A generator can briefly light up 100 LED bulbs with a single drop.

There have been numerous attempt to generate electricity using rain, but this may be one of the more effective solutions yet. Researchers have developed a generator that uses a field-effect transistor-style structure to instantly produce a surprisingly high voltage from water drops -- a single drop can muster 140V, or enough power to briefly light up 100 small LED bulbs. Earlier generators without the structure produced "thousands" of times less instant power density, the scientists said.

The new design mates an aluminum electrode with an indium tin oxide electrode layered with PTFE, a material with a "quasi-permanent" electric charge. When a drop hits the PTFE/tin surface, it bridges the two electrodes and creates a closed-loop circuit. That helps fully release any stored charges. The technology could handle sustained rainfall, too. If there are continuous drops, the charge accumulates and eventually hits a saturation point.

There's still work to be done to translate this to a practical product. A brief burst of energy is easy -- accumulating enough of it for continuous power is another matter. Still, the potential uses are easy to see You could apply generators like this to the surface of anything where rain (or other water splashes) is likely to strike. Building rooftops could offset at least some of the electricity use from the people below, while electric boats could extend their range. It could even be used to power connected devices that regularly get wet, like umbrellas and water bottles (Read More ...) 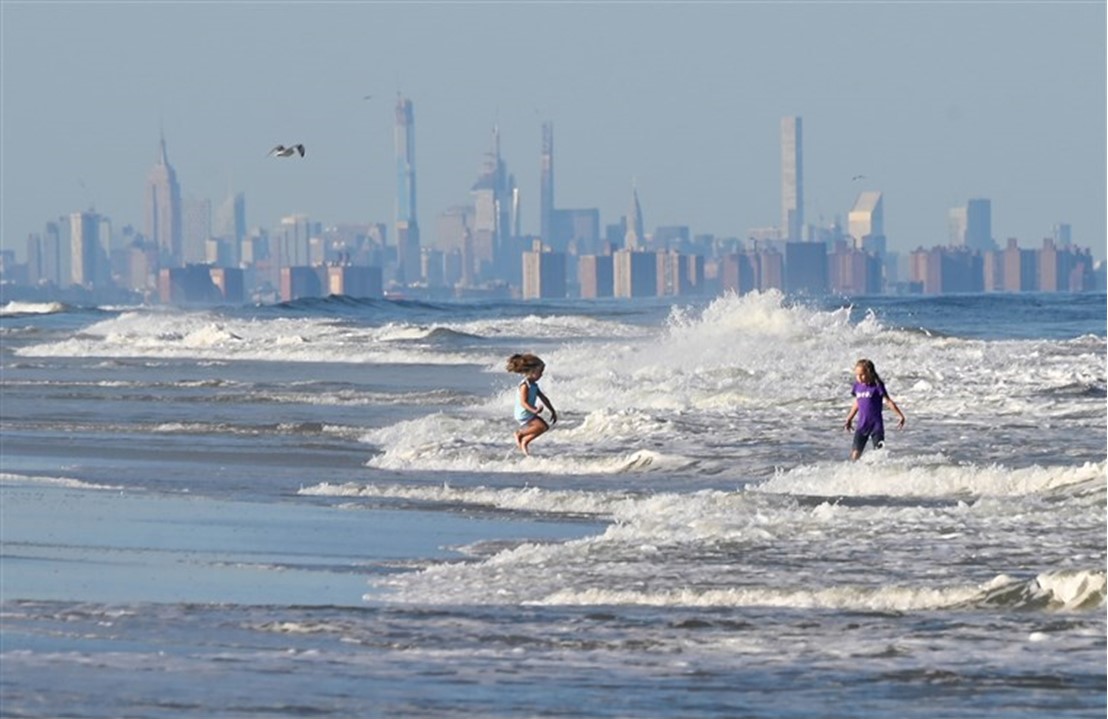 2/11/20 - NBC News -  Climate change models predicted ocean currents would speed up — but not this soon: Ocean currents, undersea conveyor belts that help regulate Earth's climate and influence weather systems around the world - have been speeding up over the past two decades as the planet warms, according to new research.

The puzzling discovery, detailed in a study published last week in the journal Science Advances, highlights that climate change could have wide-ranging effects that are unexpected or severely understudied.

Climate models had predicted that ocean circulation would accelerate with unmitigated climate change, but the changes had not been expected until much later this century, said a co-author of the study, Michael McPhaden, a senior scientist at the National Oceanic and Atmospheric Administration.

The disparity suggests that some climate models may underestimate the effects of global warming.

"Our primary tool for looking into the future about how greenhouse gas forcing will impact the climate system is these models," McPhaden said. "If we can't have confidence in their projections, that raises very serious concerns about how we prepare for a future world different from the one today."

McPhaden and his colleagues discovered that currents in three-quarters of the world's oceans have accelerated over the last two decades, driven primarily by faster, more intense winds. On average, the researchers found that global ocean circulation has accelerated by 36% since the early 1990's.

"It surprised us how strong it was (Read More ...)