The weekly EIA Natural Gas Storage Report advised today that there was a draw of 201Bcf from Underground Storage for the week ending 1/24/20.

This is 1Bcf below the forecast of a 202Bcf draw, the average prediction of sector analysts and traders in the Dow Jones Newswires weekly survey. This compares with a draw of 171Bcf last year and a 143Bcf draw for the five-year average. Storage is 524Bcf above last year for the same week and 193Bcf above the 5-year average. Working gas in storage stands at 2,746Bcf. (Read More ...) 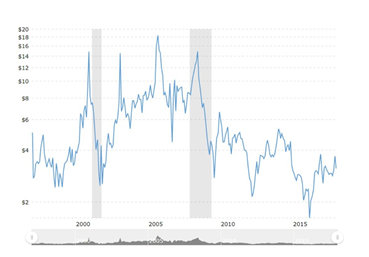 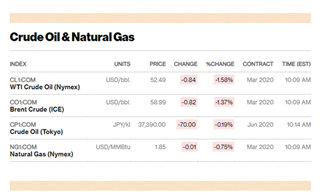 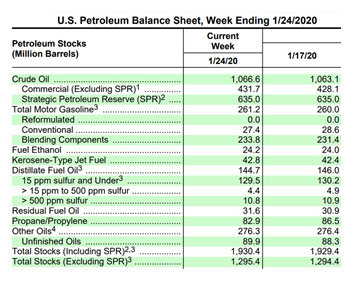 US crude inventories (EIA) increased by 3.6 million barrels to 431.7 million for the week ended January 24th, according to data released yesterday morning by the US Dept of Energy. Traders in the Reuters poll projected an increase of 0.5 million barrels. 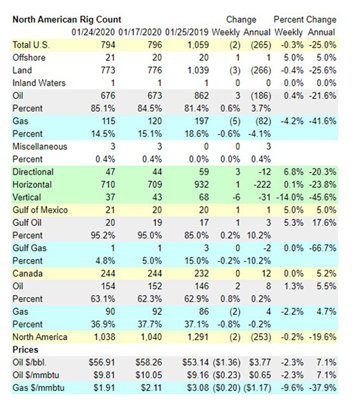 According to the Baker Hughes Count, US Rotary Rigs targeting Natural Gas were -5 at 115 for the week ending January 24th and -82 from last year.

Rigs targeting Crude were +3 at 676. There are 186 fewer rigs targeting oil than last year. Canadian Rigs were unchanged at 244 and +12 from last year. US Rigs drilling remain at 85% of all drilling activity. 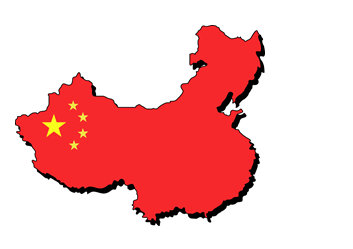 China’s Promise To Buy More US Energy Probably Unachievable: The Phase One trade agreement  between the United States and China puts America back on track to become a significant supplier of oil and gas to the world’s largest energy import market, even if the goals set out in the agreement prove unachievable. Under the agreement, China committed to increase imports of U.S. energy products - mainly crude oil and natural gas - to $18.5 billion in 2020 and $33.9 billion in 2021.

But with China keeping in place tariffs on U.S. crude and liquefied natural gas (LNG), it’s hard to see trade levels reaching those heights. American energy will remain more expensive for Chinese companies than supplies from elsewhere because of Beijing’s 5 percent tariff on U.S. oil and 25 percent levy on U.S. LNG. The world is awash in oil and gas at the moment - OPEC and its allies are deliberately holding back 2.1 million barrels a day of production to support higher prices - which means China can easily find alternative suppliers to the United States, particularly in the Middle East and Russia.

Moreover, Chinese officials, including Vice Premier Liu He, who was in Washington last week to sign the agreement with President Trump, continue to stipulate that any uptick in trade be based on “market-driven” purchases. The fine print in the deal gives China significant wiggle room to avoid U.S. energy imports based on “commercial considerations.”

So the trade deal should, at least for now, be met with cautious optimism. Mike Sommers, president of the American Petroleum Institute, accurately described the deal as a “positive step forward” while encouraging the Trump administration to “stay at the negotiating table until the U.S.-China marketplace for energy trade is fully restored and all remaining tariffs are lifted.” (Read More ...)

The AccuWeather 1-5 Day Outlook forecasts above-normal temps for the entire US with the exception of the Southern Florida, Southwest Texas, Eastern Arizona and Western New Mexico, which are expected to be at normal temps.

The 6-10 Day Outlook forecasts above-normal temps for the the Eastern half of the US, and the balance of Northwestern states. A coastal sliver of Oregon, Washington and California will be at normal temperatures, as will the entire Southwest.

The 11-15 Day Outlook forecasts above-normal temps for the Eastern half of the US. The Northwestern quarter of the country will be at below-normal temps and the Southwest is projected to be at normal temps.

The 30-Day Outlook shows normal temps for the entire country with the exception of Nevada, Eastern California, Idaho and Oregon,which are projected to be at above-normal temps.

Severe Weather: A classic winter jet stream is set up over the North Pacific Ocean. This jet stream will continue to steer more stormy weather into the Northwest through this weekend. A flood watch has been issued for parts of western Washington. More soaking rain and feet of Cascades snow could hit the region next week.

More heavy rain could trigger flooding and landslides in the Pacific Northwest through Groundhog Day weekend from a relentless jet stream pattern which has soaked the region much of this month. 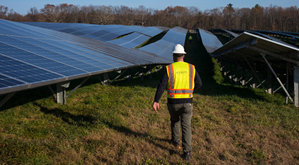 Renewable energy is growing fast in the U.S., but fossil fuels still dominate: Most Americans (77%) say it’s more important for the United States to develop alternative energy sources, such as solar and wind power, than to produce more coal, oil and other fossil fuels, according to a recent Pew Research Center survey. Which raises the question: How does the U.S. meet its vast energy needs, and how, if at all, has that changed?

The answer, as one might expect, is complicated. Solar and wind power use has grown at a rapid rate over the past decade or so, but as of 2018 those sources accounted for less than 4% of all the energy used in the U.S. (That’s the most recent full year for which data is available.) As far back as we have data, most of the energy used in the U.S. has come from coal, oil and natural gas. In 2018, those “fossil fuels” fed about 80% of the nation’s energy demand, down slightly from 84% a decade earlier. Although coal use has declined in recent years, natural gas use has soared, while oil’s share of the nation’s energy tab has fluctuated between 35% and 40%.

The total amount of energy used in the U.S. – everything from lighting and heating homes to cooking meals, fueling factories, driving cars and powering smartphones – hit 101.2 quadrillion Btu in 2018, the highest level since data collection began in 1949, according to the federal Energy Information Administration (EIA) (Read More ...) 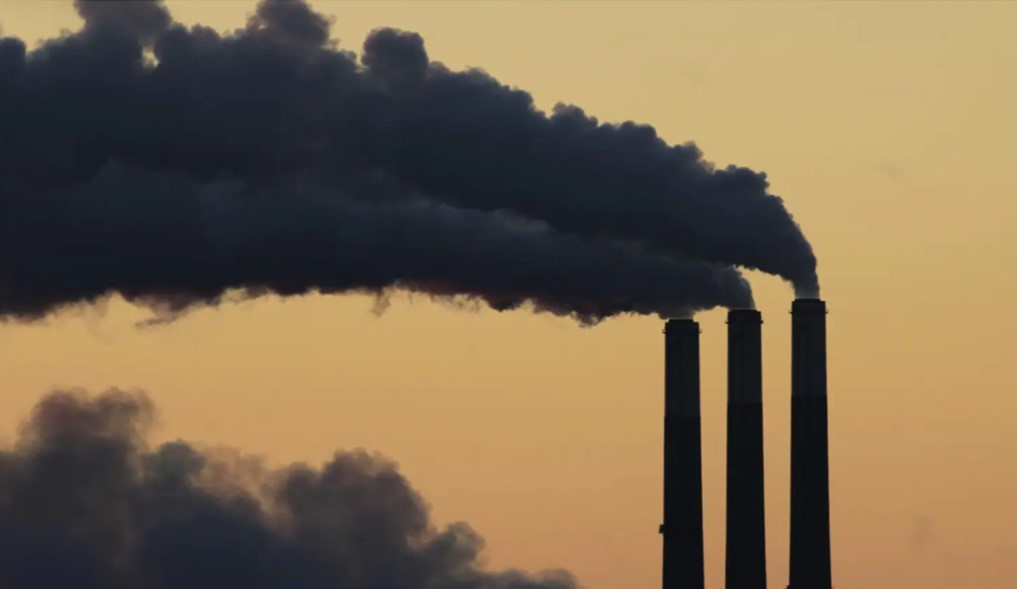 Greenhouse gas emissions in the United States dropped in 2019 after a sharp increase in 2018, new data released earlier this month shows. The drop resumed a long-term downward trend driven chiefly by a shift away from coal power generation.

The story of the emissions decline has largely been one of market forces—rather than policies—that have made utilities close coal plants in favor of cheaper natural gas and renewable energy. But this shift to lower-carbon energy has been restricted to the electricity sector, and the nation's emissions cuts are still not on track to meet the targets it agreed to under the Paris climate accord.

In order to meet those goals, experts say, federal policies will likely need to target other sectors that collectively make up a majority of U.S. emissions.

Overall, U.S. greenhouse gas emissions fell about 2% in 2019, according to preliminary estimates by Rhodium Group, an economic analysis firm. The previous year, strong economic growth and other factors had pushed emissions up roughly 3%. The 2019 drop was driven by a nearly 10% fall in emissions from the power sector, the biggest decline in decades, according to Rhodium.

And the story there is all about coal. Coal generation in the U.S. fell by 18% last year, the largest annual decline on record. 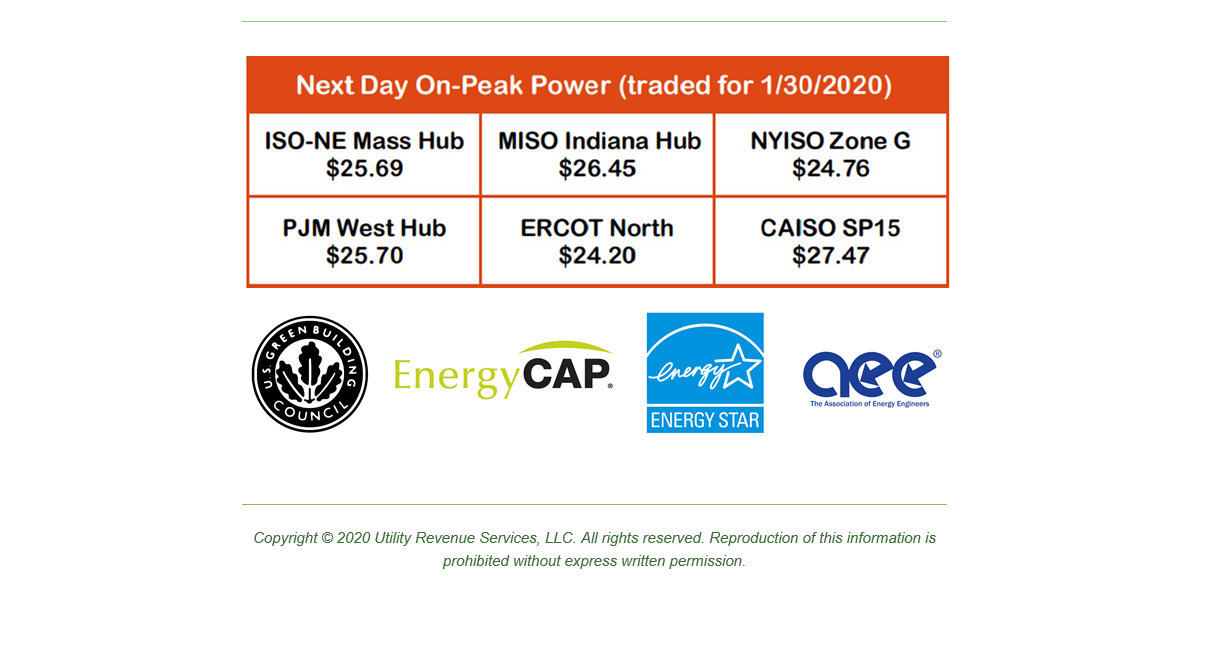